Hello again! Today I’m not at work so after some adult stuff I had to do, and then 2 episodes of “Disenchantment” while eating a pile of brownie-chocolate ice creams, it is finally the time for battle report! 🙂

My opponent was Maciej (aka Cień – eng. The Shadow). He plays Legion since MKI and always have some fun lists and fully painted, sweet blueish models. And, which is important to me – he is very patient and friendly 🙂 His list:

It is worth to mention that that game was a feast of ones on dices – which gave us a lot of laugh 🙂
We did a starting roll and thanks to 1 on Maciej dice I choose to start. I set Long Riders to the left, Horthol and beasts to the right, and Warders with Champions in the middle. I run everything up, mostly caring not to enter Legions shooting ranges (my only model in range is a single bison – effective def 16 thanks to hill). Madrak cast Even Ground, put some fury to the stone and charge the wall. Stone activates and thanks to Awaken the Stone it is (almost?) full now. 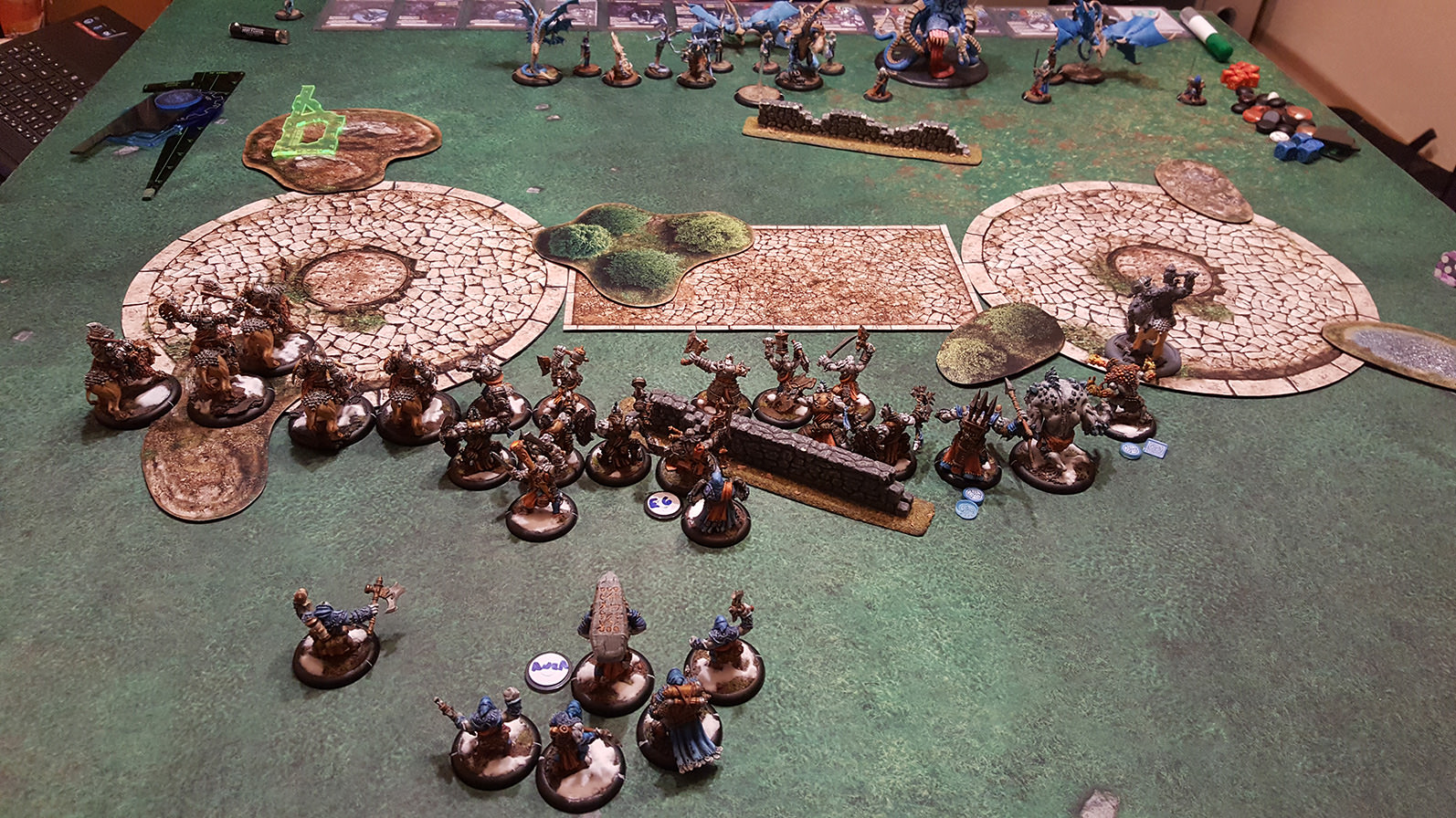 Legion. Maciej push some models, but not too far (his ranges are far better than mine) and shoot the bison with Angelius doing a little dmg.

Trolls turn 2. I put some models in the zones and sent 2 Long Riders far away to mess with Legion and to be annoying 🙂 Madrak cast… guess what? Yea, Even Ground! 😉 And FEAT (defensively). 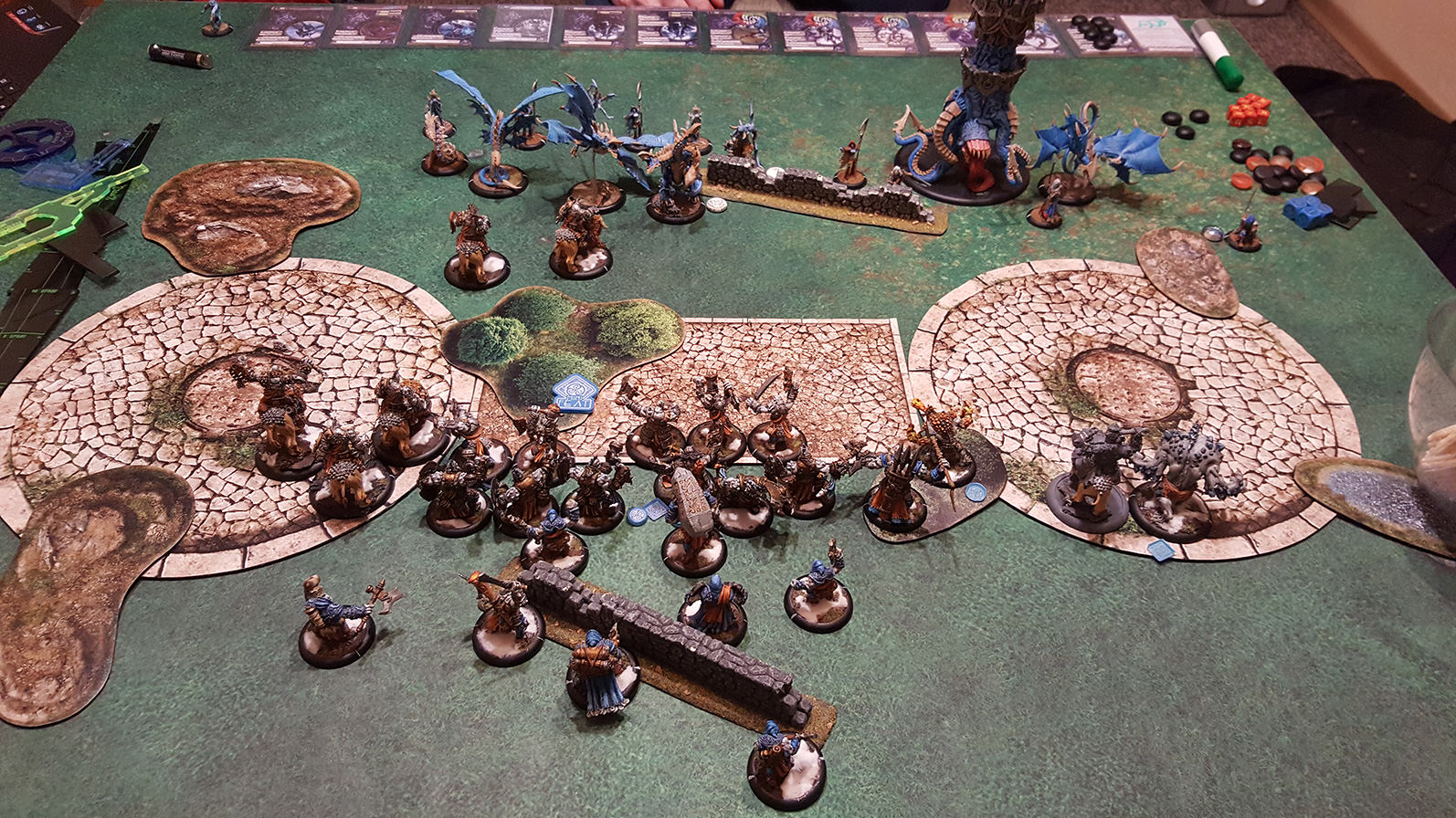 Legion turn 2. On the right Throne and Blackfrost Shards hit Horthol 3 times making him stationary – my super solo is out for the next turn… :/ Typhon comes closer and sprays: 2 attacks kills 2 bisons, 3rd covers some Champions which I mark evenly on all members thanks to Sanguine Bond. Some beast shoot at another bisons killing him. Angelius toeing left zone (hmm, does he have any toes?! Digusting!) .

Trolls, turn 3. I want to murder something! Typhon is high on my list. I activate Chronicler and put Charge of the Trolls on Champions. Fell Caller gave them pathfinder. Impaler runs to engage Typhon (and to give Chronicler bonus). Stone activates and puts +1 str aura. 4 Champions charge and even under Thagrosh aura (-2 str) and Typhon’s Rapid Healing the beast is down and RFP (theme bonus). Exited I decide I can kill a Throne with my Mauler. I move Madrak up, so I can have Mauler in my control when it will charge. Mauler rages himself and charge. I need 4 to hit – easy peasy. First (charge) roll to hit: snake eyes… 🙁 Second initial: snake eyes.. After some additional attacks Throne was scratched for like 5 dmg laughing with his enormous maw. On the left side bisons charge/slam Angelius. The slamming one miss, the other doing some serious dmg. 4 Warders screens Madrak, 1 charges Angelius doing nothing. I score a point in the middle zone. 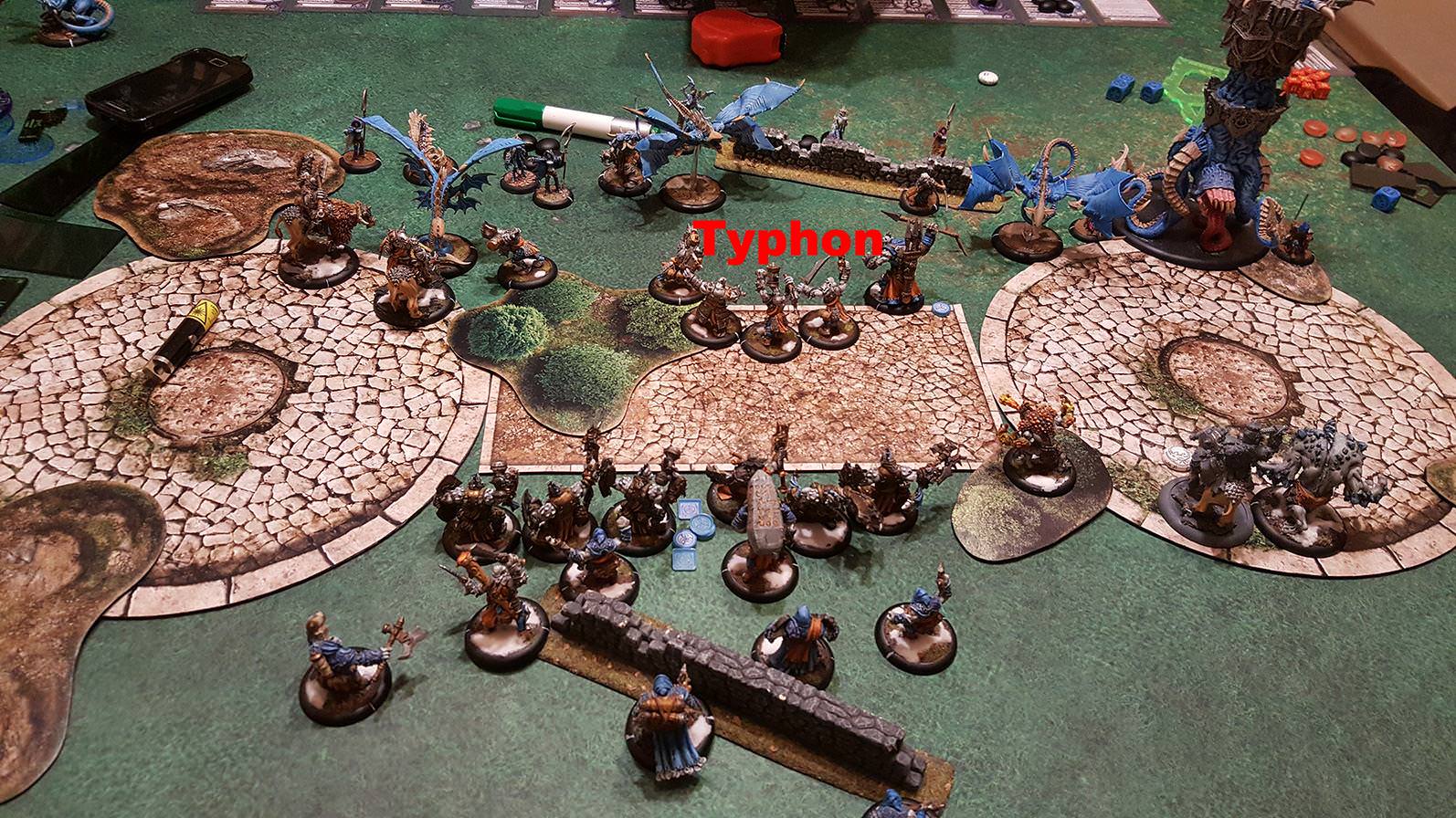 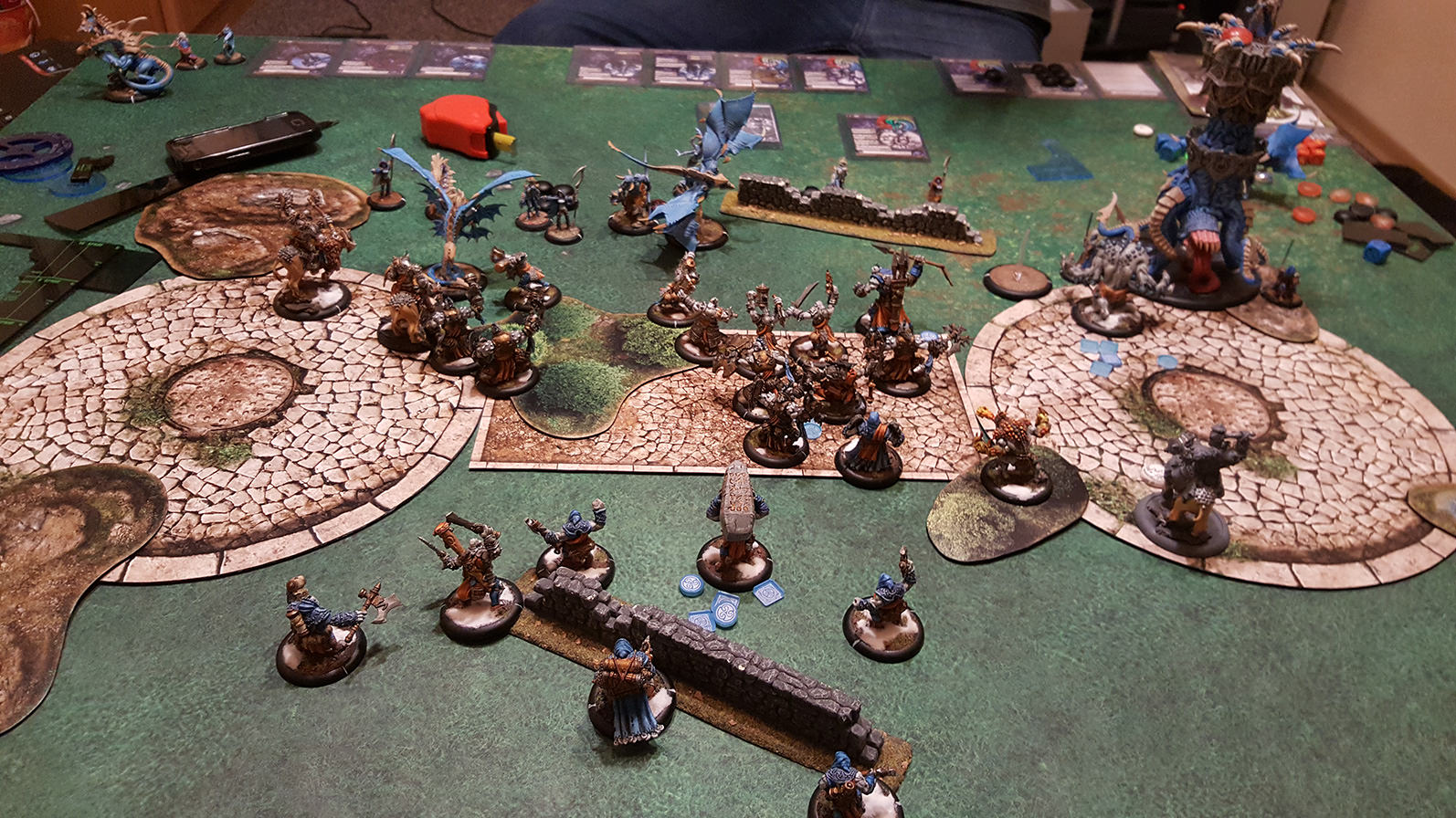 Legion turn 3. It is worth mentioning that Maciej loves CK. And spoiler alert: Madrak cannot be that far away 😉 Throne charges (taking a massive free strike, but he doesn’t care), and kills some models in front of my warlock. Additionally, Throne and some Shards reduced Madraks def by 4. Lonely Forsaken charges too, doing his ka-boom magic, but rolls a lot of ones and did nothing. Neraph and his twin Seraph shoots me, but I ignore one attack with Scroll and 2 other transfer to Pyre Troll. But the show is going on. Thagrosh himself charges! He need anything but double ones to hit. Rolls double ones – twice 🙂 In the end he kills Madrak and I roll 1 for tough. Legion wins! 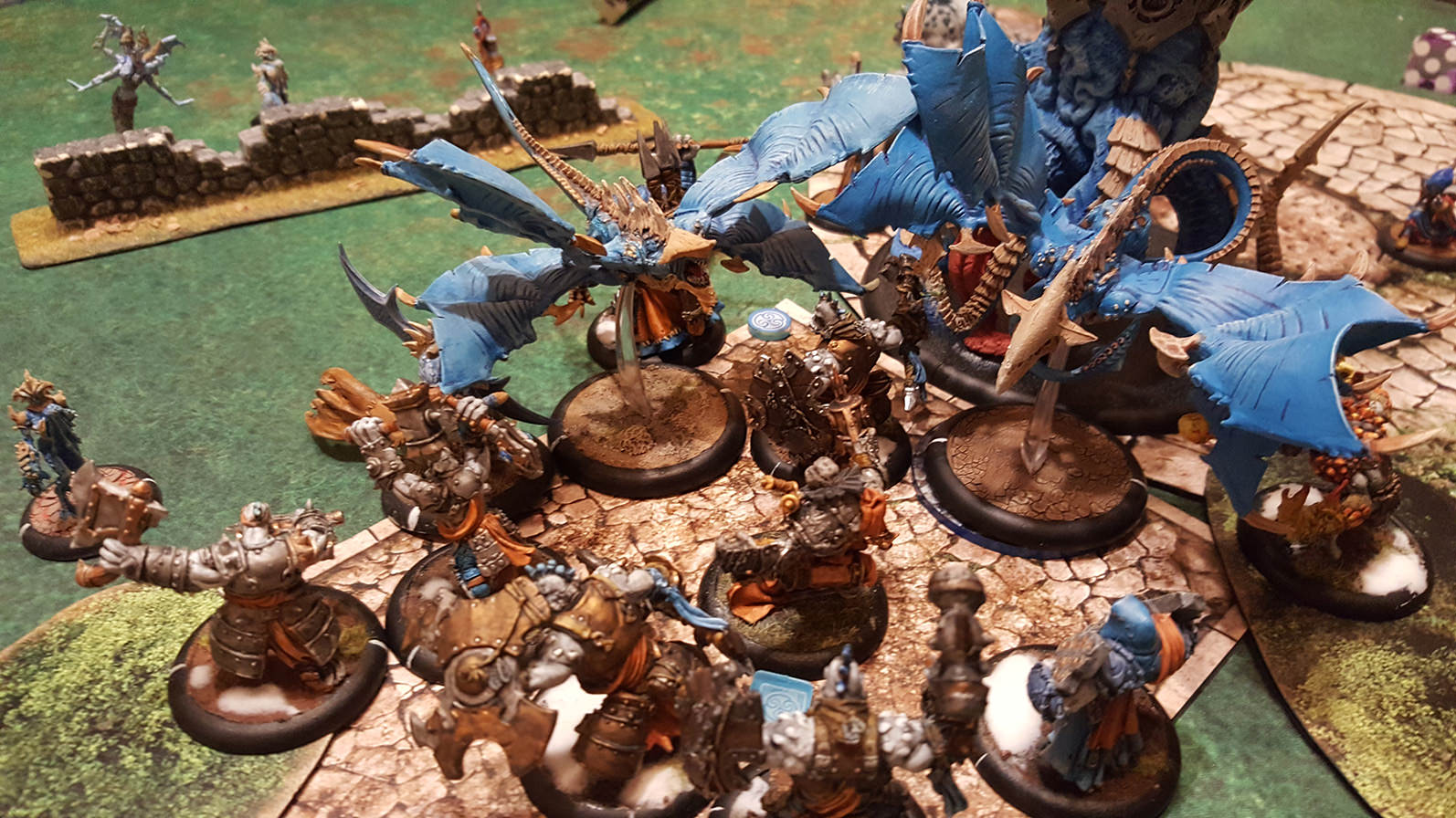