This is my 1st report back from February 2018. I played my second game with Madrak1 against Una2 piloted by Maestro. I thought it shouldn’t be hard, beacuse everyone plays Madrak and it seems really strong. Unfortunately, I have never faced Una2 before… 🙂

I lost the start roll, but Maestro is a good friend and give it to me. That’s great! So I run forward, keeping stuff around Madrak (because Even Ground), only letting the cavalry ride to the left zone and Horthol to the right one. Bisons got concealment from Chronicler. Photo: 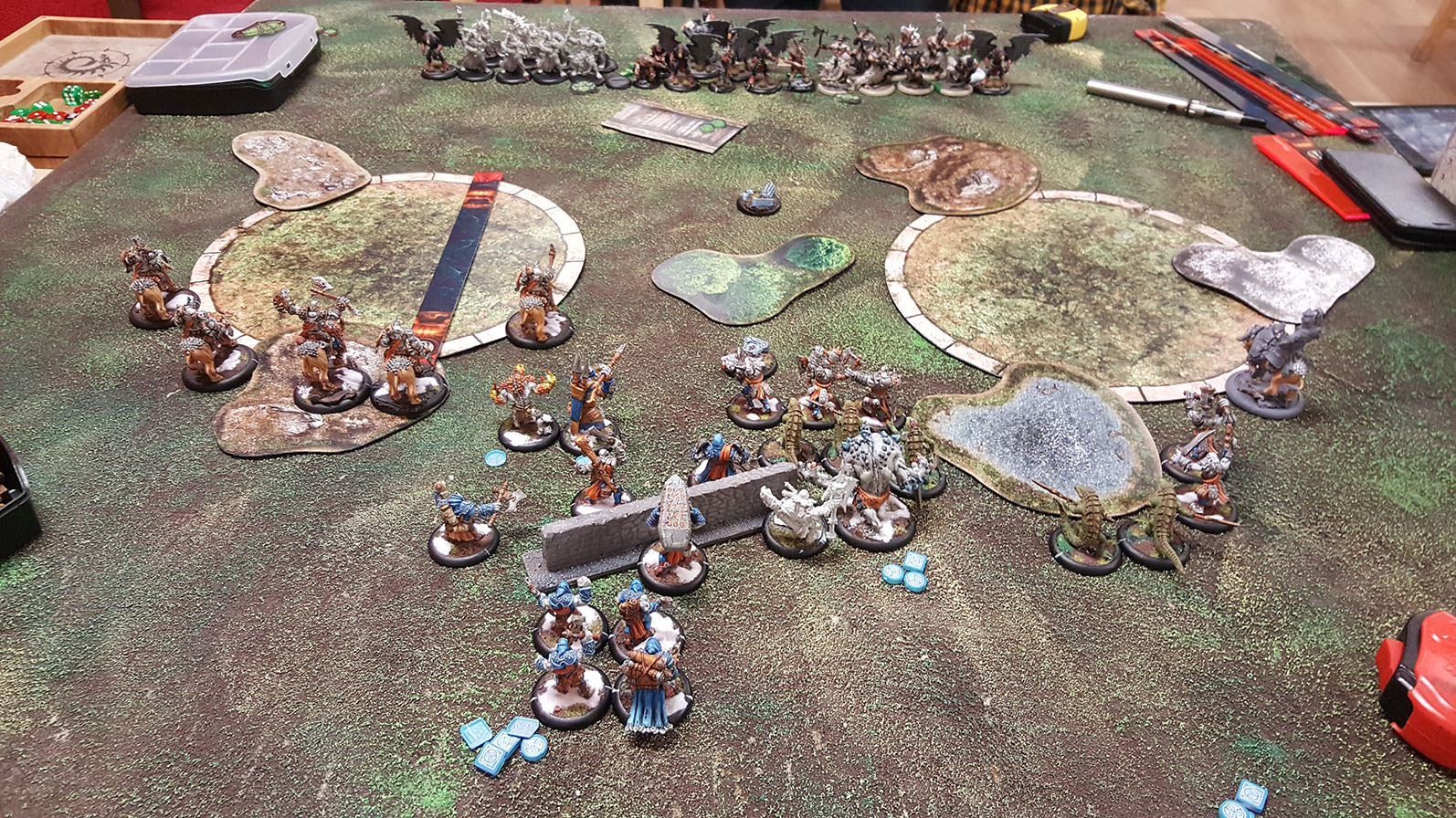 Maestro is positioning his guys for aplha in the next turn. He puts Mirage on the right (looking from my perspective) Ravagers and, if I remember correctly, Hand of Fate on the left ones. He shot one bison with Una, but it’s not very effective. Photo: 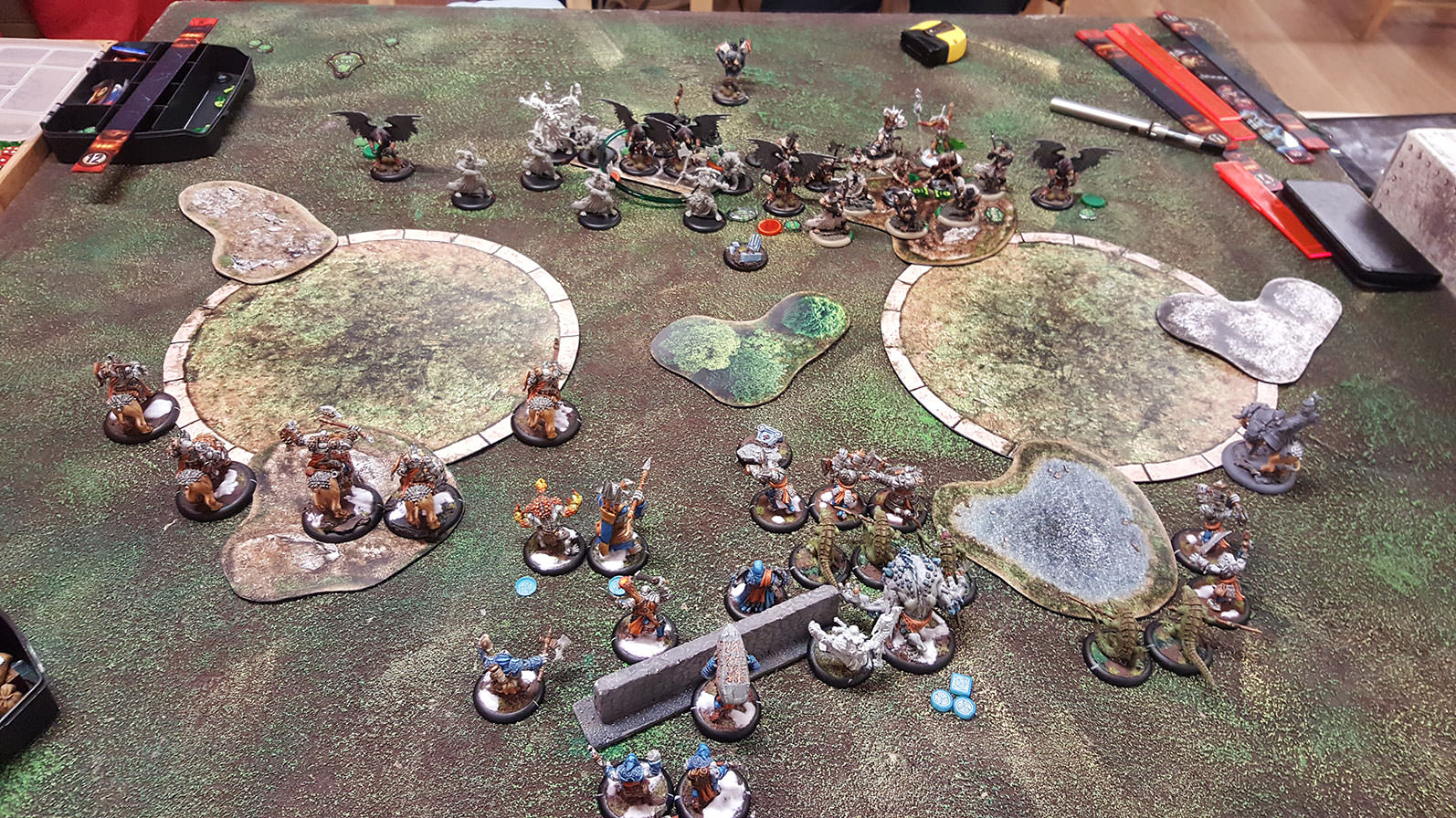 My turn 2. I set up for brick formation, cast Even Ground and FEAT. No charging on my models feels nice. I put some models to zones, beacuse Maestro will score on his turn. I feel really safe thanks to the Even Ground and stone aura: bisons are def 14 (16 against shooting, because Chronicler), arm 20; Champions are def 16, arm 18; just behind them are Warders with arm 21 and shield guard. What can go wrong? Chill 🙂 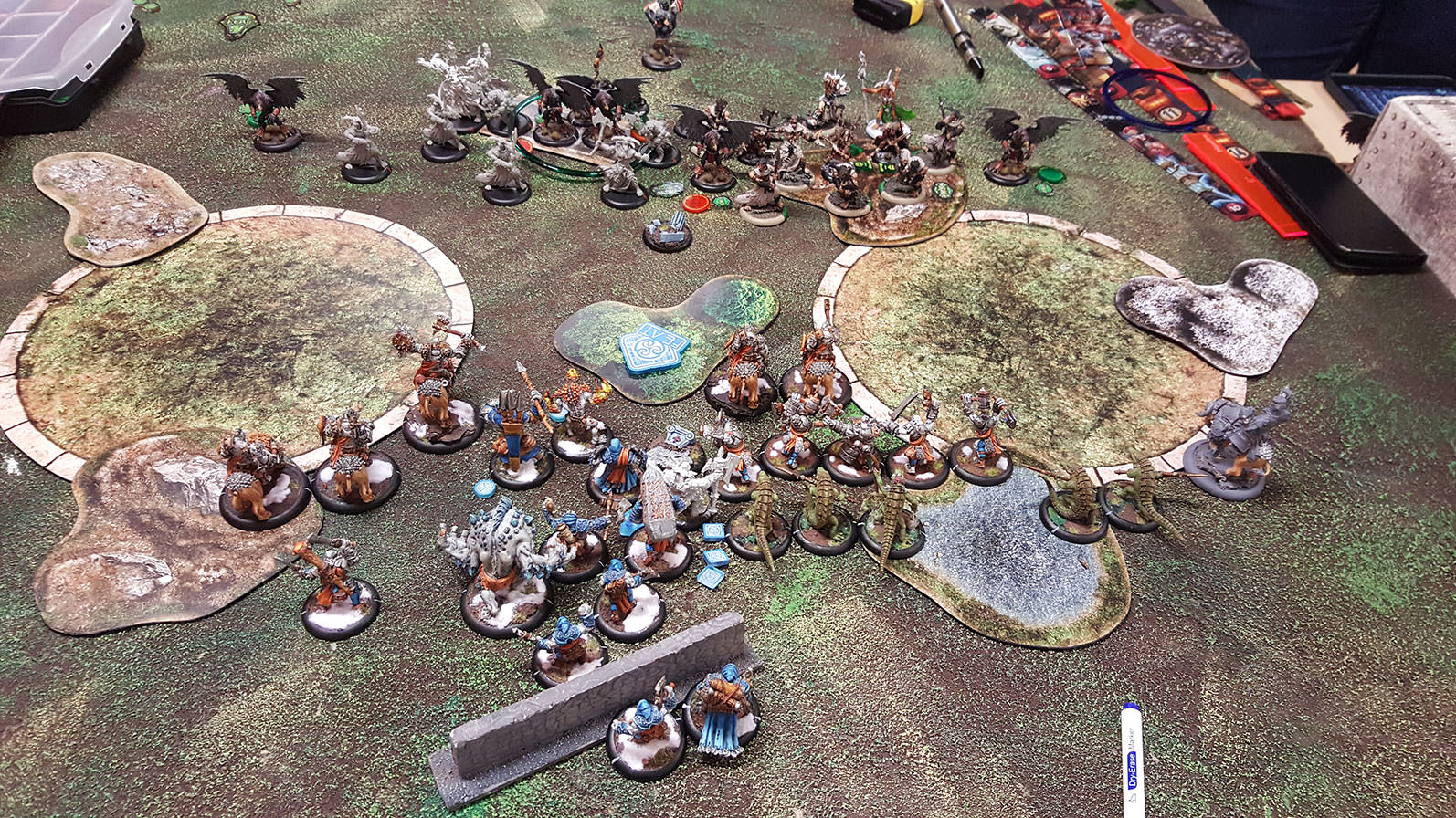 Maestro, turn 2. Ravagers from the right side used Mirage forward. Lanyssa run the flag. One of the Ravagers run behind the forest (out of line of sight from Horthol). Griffon on the left is more than 12″ from Long Riders. A few Ravagers come to meet Riders, but they just harmlessly touch them. Scoring: 1-0 to Circle (Lanyssa on the flag). 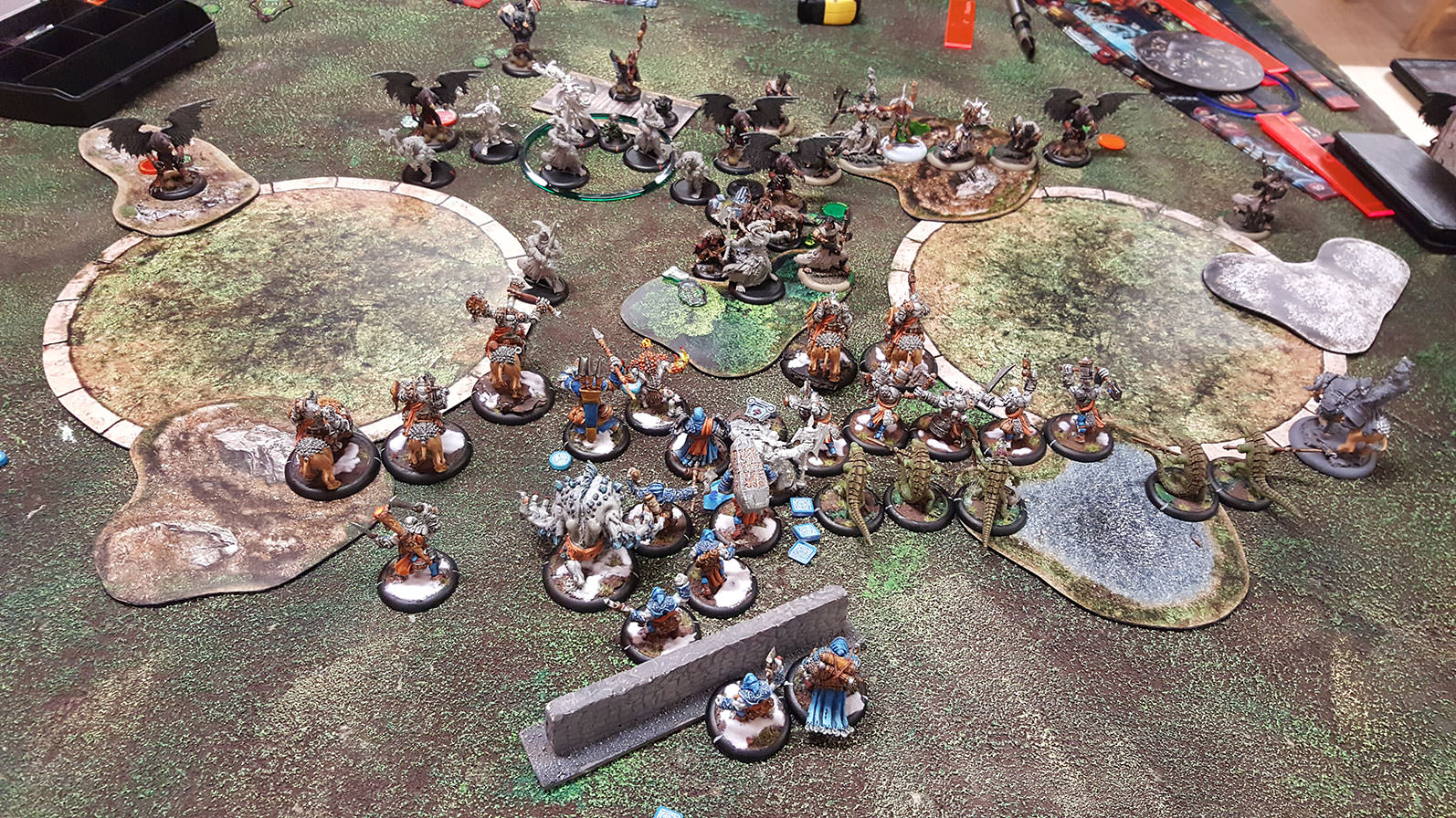 My turn 3. Moses sticked to the flag cast Guided Hand on Champions. Fell Caller hands out pathfinder to the Champs, which charge the Ravagers and Death Wolves, but most of the attacks miss or roll for dmg poorly. Some enemies vanish anyway. Chronicler tells Hero’s Tragedy to the Champions. Madrak cast Far Strike on himself and kills Ravager in the right zone. Blood Boon let him cast Even Ground for free and ricochet miss its target. He stays on 2 transfers. Warders park near Madrak’s right side. Impaler throws spear into Ravager and crit slams him into the Griffon, but dmg rolls are low and both survives. Long Riders press forward – kills some Ravagers in zone and one runs to engage Griffon. Now it’s time for my MVP – Pyre Troll. He spits fire (boost to hit) on Lanyssa (represented by empy base) – hits and I roll snakes eyes, so she lives but is set on fire. Luckily 2 griffons are under 3″ aoe template. I boost dmg on both of them, but with no great success. Birds are on fire too. I score both zones and flag. 3-1 for Trolls. 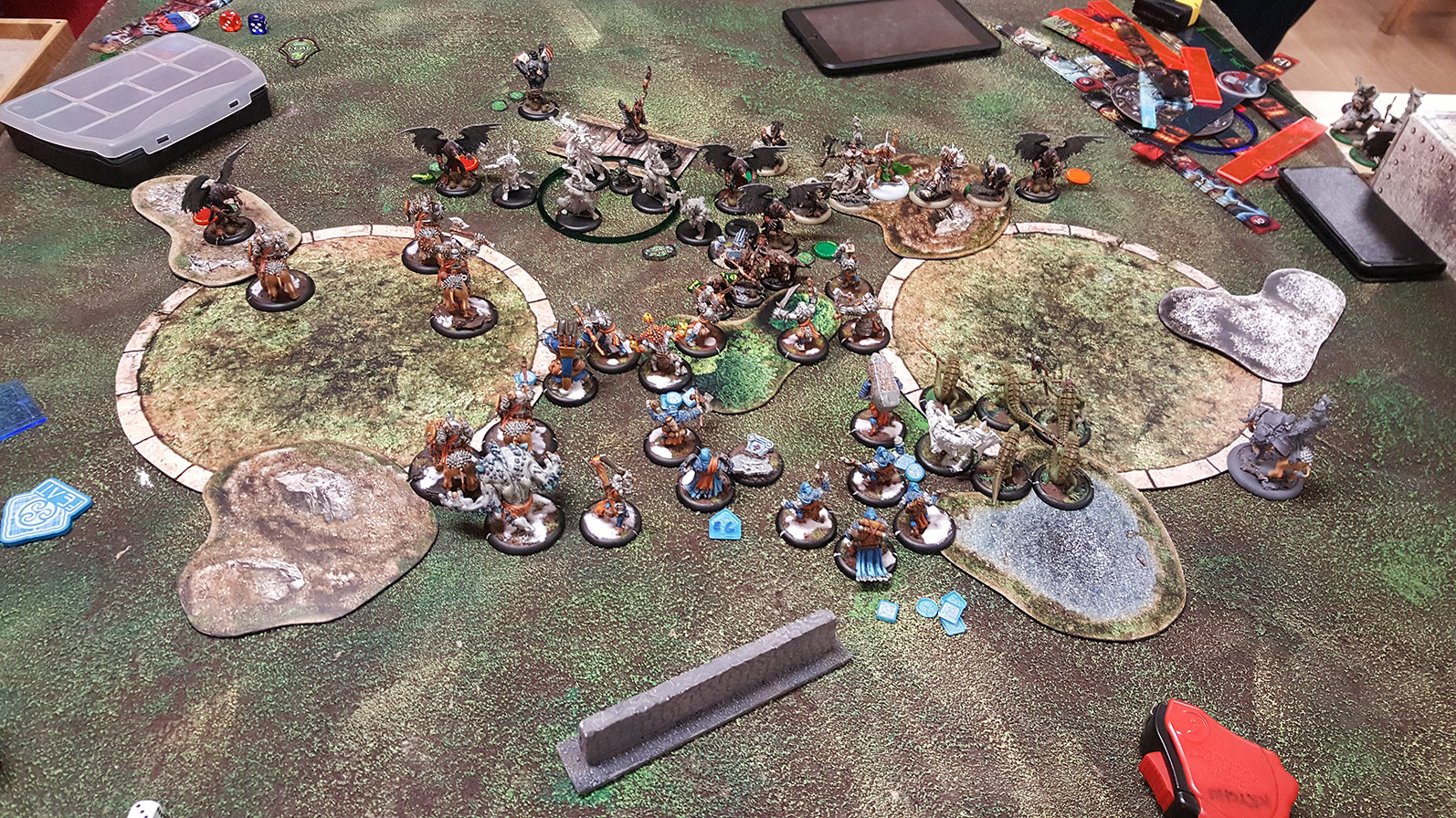 Circle – turn 3.Lanyssa burns to death. Fire goes out on one Griffon, the other one takes a little dmg. Right Ravagers minifeat and charge Warders (guest starring: gators), but rolls are so poor that nothing happens. And now…! Una FEATS! This is some Abracadabra. One Griffon flies from the other end of the world to serve as a flank bonus. Another one flies and kills stone scribe guys, making room for his pal and do some little dmg to Madrak. 3rd bird (primaled by Gorax) kills my warlock, despite 2 transfers and Scroll of Grindar’s Perseverance. And thats how I have learned the power of Una… 🙂 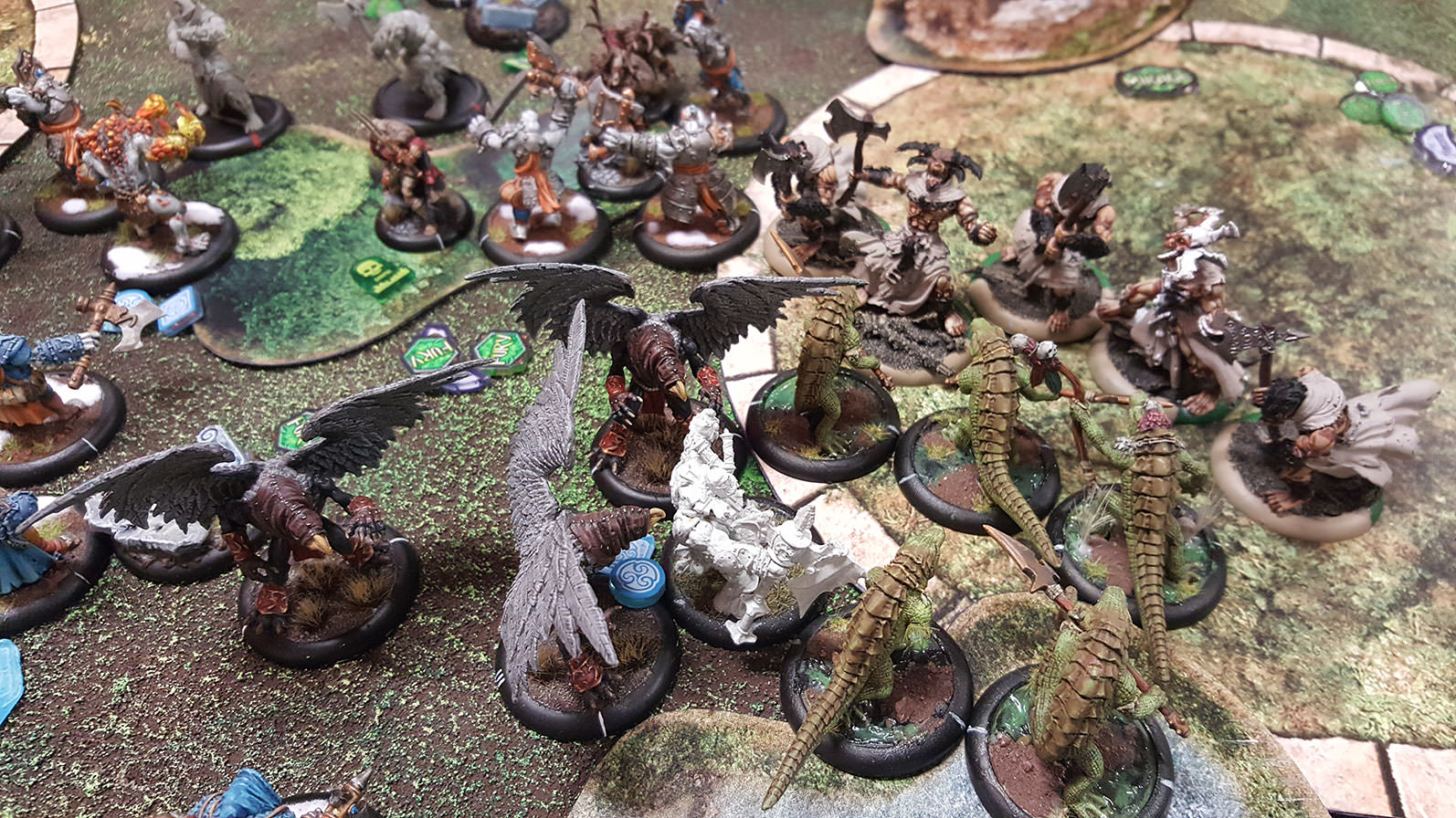