This is my first battle report in this blog. Sorry for some mistakes in the report and with the pictures – I hope that will improve in the future.

My opponent was Arhain, one of the top Polish players and a WTC team member. He was training for the WTC 2018 tournament.

We had some proxies (his huge models, troll cannon and my Hunter acting as a Charger).

I did not have any matchup strategy. I played against Trollbloods about 1 year ago with Khador and since that time everything has changed it seems. I lacked experience with this (or any) Trollblood list and options so I didn’t have any pre-game thoughts other than trying to survive and not losing through some “out of nowhere” combo.

Normally this list is meant to fight Cryx, PoM and mixed opponents. It is based on hard hitting infantry and decent shooting/CK option from the battlegroup. It also negates some defensive techs, like incorporeal, stealth and partly – the clouds. I actually had some success with this list (against top PoM and Cryx players) but I sadly wasn’t making the reports for the blog back then.

The best thing about the tier is a pre-game move for Stormblades, because otherwise they would be too slow for the mk3 meta. My worst enemy is the deathclock – 4 infantry units and decent shooting consumes a lot of time.

Ok let’s see how it went.

I was going first. My opponent picked a table side with convenient forest and hill, giving me the rubble and a wall on my side. I deployed symmetrically, while the Trolls had Sea King on my left flank (supported by Fire Eaters and the cannon) and two War Wagons towards the right flank (supported by Raiders and Braylen). Stormblades made their advance moves. 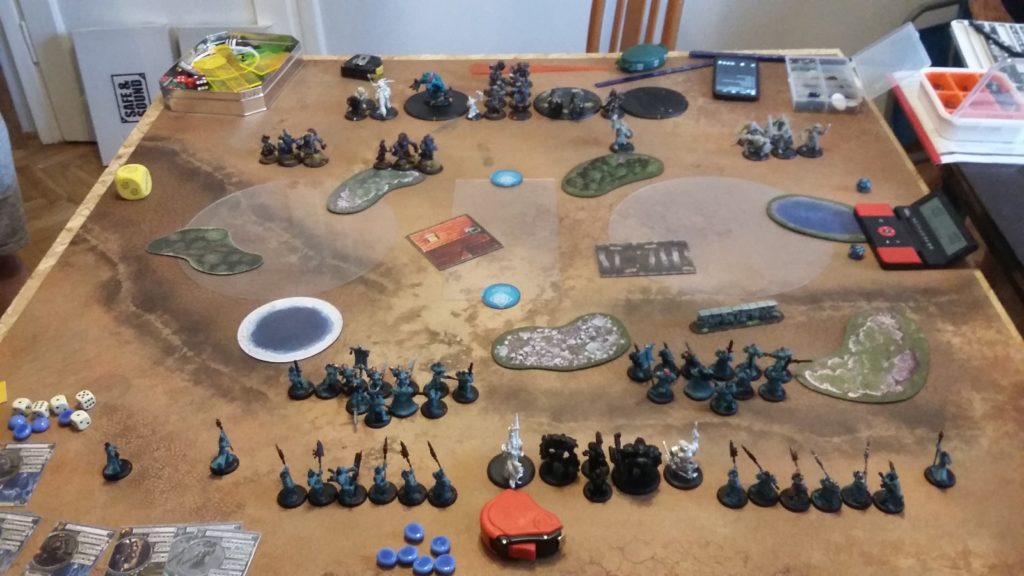 I ran wide, trying to spread my infantry.

I forgot to use Foxhole (for the whole game….), which could save some random knights during a game.

Fire Eaters massacred most of the left flank Stormblades despite the minifeat.

War Wagons killed some Stormblades and moved far back (surprising when seen for the first time). Rest of the Trolls stayed outside the zones. 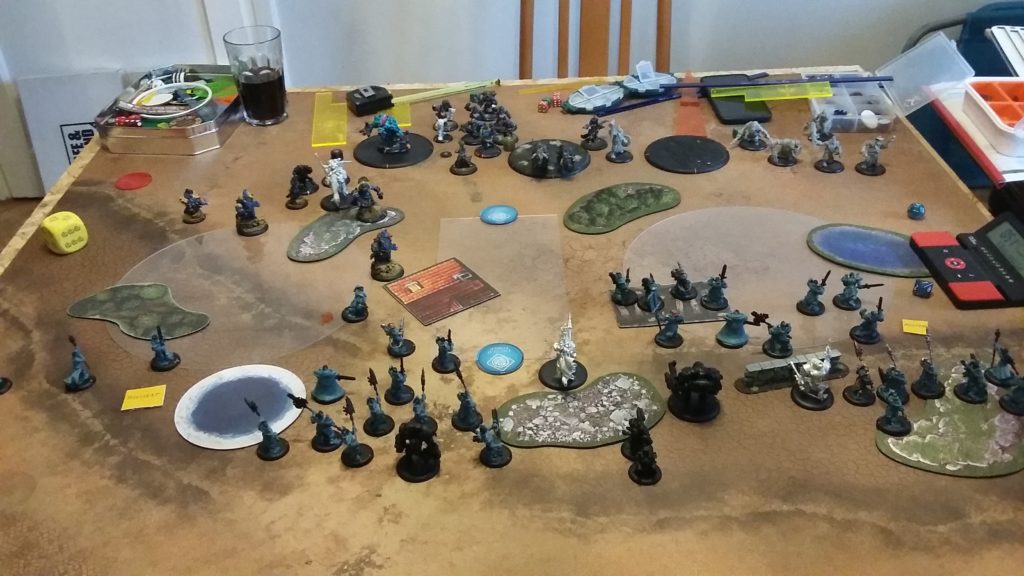 Left Stormblades, Charger and Stomsmiths killed some Fire Eaters with shooting but didn’t kill them all

Triumph dealt some damage to the middle Wagon. Siege and right charger were too far to hit anything.

Anastasia ambushed and killed one Raider while engaging two more.

Katherine parked near the objective looking for the opportunity to charge.

Both War Wagons massacred right Stormblades, dealing some damage to the Triumph, objective and knocking down Katherine.

Fire Eaters and Raiders killed some models, including Anastasia.

I think that Grisel used her FEAT in this or the third turn. I am not sure, because her army was highly mobile and dealing heavy damage all the time anyway. 🙂 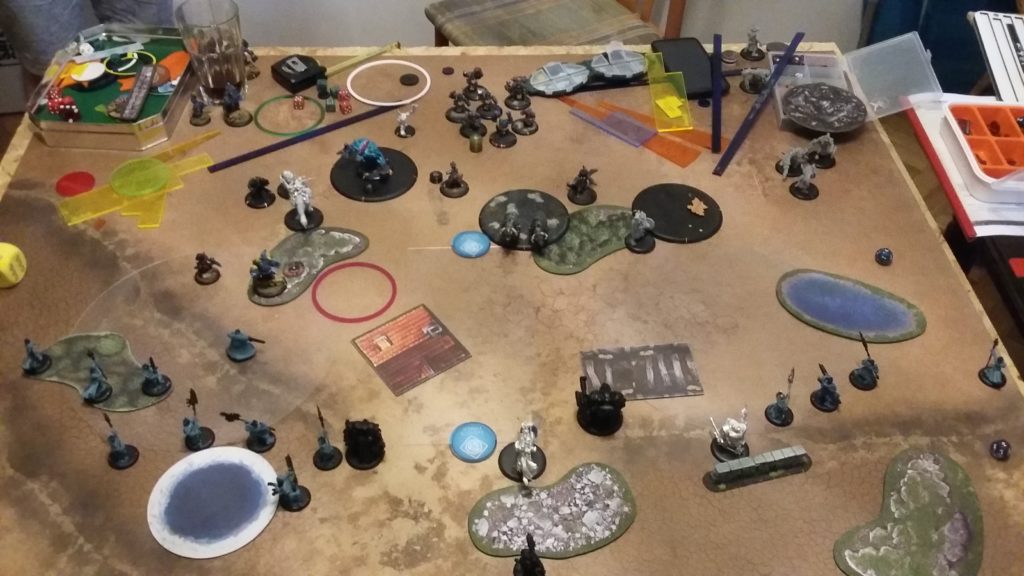 In the third round we decided to cheat a little and move Siege forward a bit. Due to my complete lack of experience with War Wagons and little experience with my list I pointlessly kept him too far behind so we decided it’s better to fix this than to loose good testing game because of such obvious mistake.

It was the only chance to use the FEAT so I used it, covering all huge based models.

I decided to focus on the middle War Wagon – having a chance to destroy it completely. I shot Groundpounder at 2 War Wagons, Braylen and Raider, dealing some damage to both engines, killing Raider and knocking down Braylen.

My warjacks fired full salvo but due to average rolling the Wagon survived with 6 hitpoints.

My left side infantry and solos killed all Fire Eaters finally and the cannon crew.

Katherine hid behind the building.

Sea King joined the fight on the left. His animus was used couple of times during a game to create rough terrain here and there.

War Wagons destroyed Triumph gun, dealt some damage to the Charger, annihilated right infantry and knocked down the jacks. 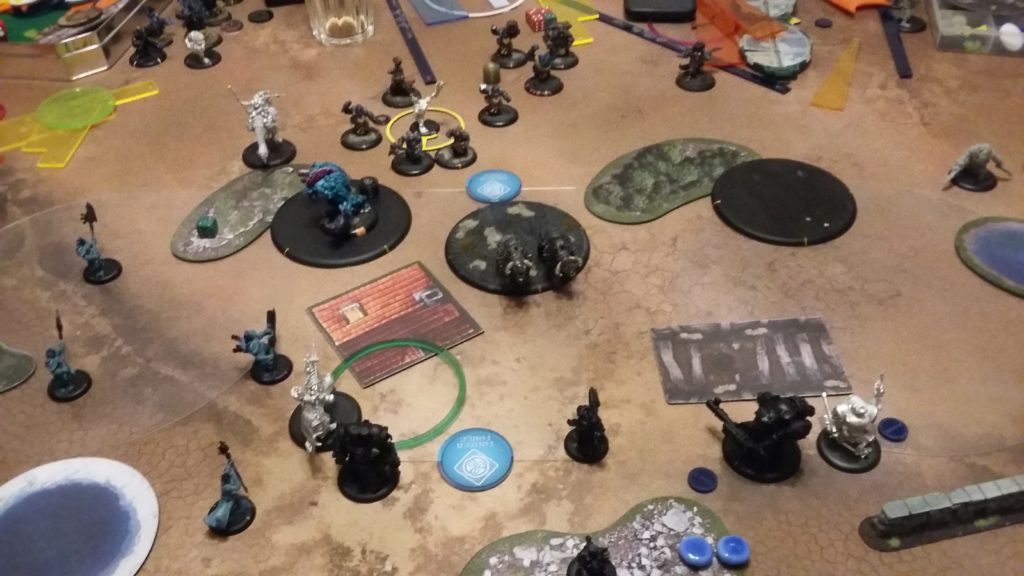 Storm Guards engaged the Sea King, dealing some damage and killing the nearby cannon and some kriels with the lightnings. Katherine charged the King generating 6 more lightnings to kill more kriels.

One Stormsmith hid behind the wood on the left to keep zone safe.

Siege, Chargers and the Triumph killed one War Wagon and some Raiders, while dealing some damage to the other Wagon.

The right zone was clear, I scored with the last Stormguards.

Sea King killed Katherine and some Stormguards but wasn’t able to kill them all. He healed.

The Charger in the right zone was damaged and slammed from the Zone by the Wagon. The Stormguards were all killed.

Sorry I forgot to make one picture somewhere between the 4th or 5th round and we tried to recreate the situation to make the missing picture. On the pictures the Siege looks like he has suddenly teleported to the zone but we probably messed something when positioning for the picture. He charged something in the zone during one of those turns.

End of 4th round: 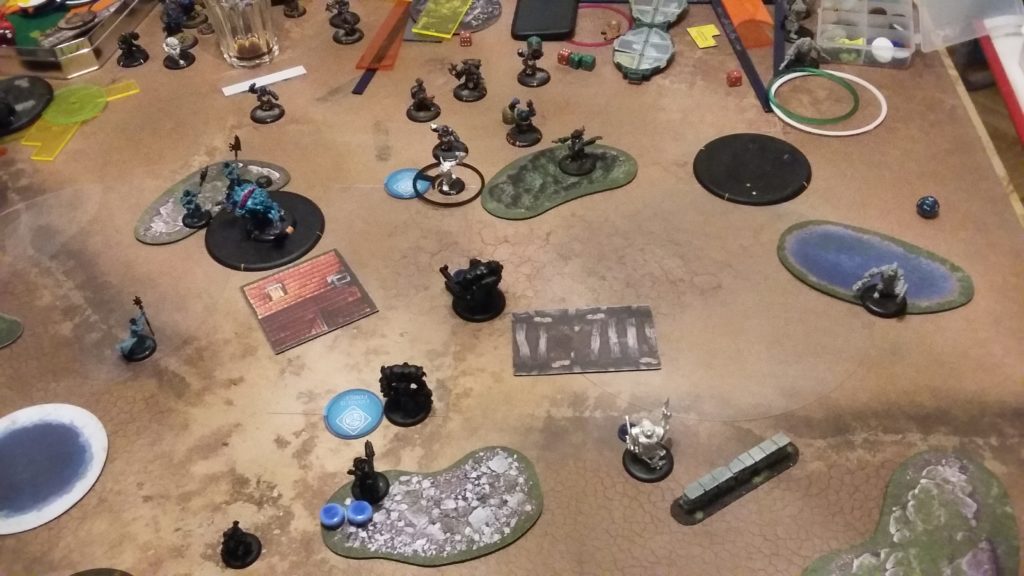 The Stormguards kept fighting with the King and some Kriels. Mistwalker was killed somehow, I don’t remember exactly.

I killed another War Wagon with all the battlegroup, but had to sacrifice the Triumph to the Sea King.

The Triumph had an accident with the falling anchor. He didn’t make it.

End of 5th round: 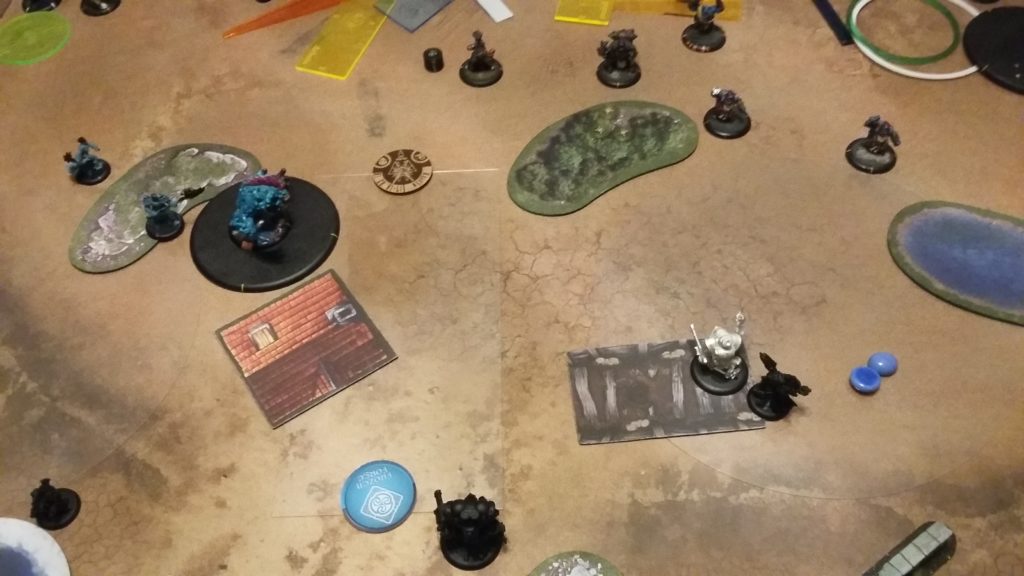 My battlegroup killed the objective and scored the zone again.

Grisel charged and killed last Stormguard so that Sea King could safely contest other two zones.

End of 6th round: 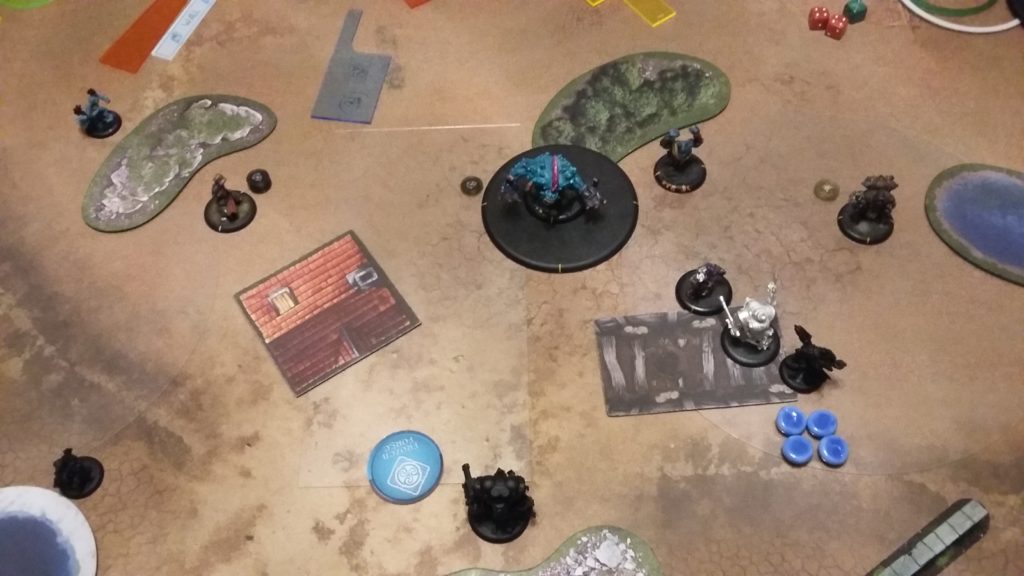 In the final round we held the game to assess the possibilities:

So we decided that the best idea was to contest as much as I could – trying to win by points. However, the Trolls collected 2 points and finished the game with a 3:3 draw in big points.