I was really curious how this tournament would go. I felt really strong with my Thag2 list and fairly ok with Anamag. I knew I didn’t playtest her enough. I was hoping to face many Anamag counters though, against which I would field Thag2. This tournament definitely was going to be fun. Players from all parts of Poland came to participate in a great event and have fun together. Even if my performance wouldn’t allow me to be satisfied, Friday’s and Saturday’s evening was obviously going to be fun! Poznań is the city where I studied and which I favour the most.

After taking a closer look at the table, and after realizing that my Thag2 list seemed to be inefficient against either of Tomek’s lists I chose to play Anamag. I was pretty sure I will have the opportunity to play Thag2 sooner or later.

I still don’t have Chosen, that’s why I included Warspears. In case of a mirror match they might come handy though. Additionally, everybody is expecting me to have them in the list and is prepared to play against them list-wise. That could give me a slight advantage.

Tomek has decided to take his Krueger2 list to my surprise. The more I think about it the more I feel that it was rather obvious pick. Tomek’s list:

The whole game has been recorded thanks to WarRoomPL. For those patient enough it can be found here (we shook hands and start around 20:20). We played in english so all english speakers could watch it, no pressure. We played Mirage. Allow me to use bottom/top flank terms rather than left and right, as I used youtube screenshots 😉

Tomasz won the roll and decided to take the left side (from camera’s point of view), as he later explained, he fully was aware that I would take advantage of the favourable forest placement and hide one Hellmouth there. This way I became the first player 😛

I deployed Blightbringer centrally. Warspears were placed, alongside with 2 units of Warmongers, on the bottom flank. I decided to put Gorag’s gang and vultures pack on the top flank due to their higher speed resulting in better contesting capabilities. Hellmouths, as I believed, considerably safe back on both flanks.

Tomasz placed his battle engine on the bottom flank and other boulders fairly spread across the central part of his deployment zone. Sentry Stones on both flanks aiming to annoy me as much as possible.

I started my first round with Blightbringer giving +2 ARM aura and running forward out of Circle’s threat ranges. Afterwards, I rushed forward with my mean Ogruns. The other flank run forward too. Nothing spectacular, as usually Anamag’s first turn is basically running the whole horde forward and keeping most of the models outside of the threat ranges. Running 10″ helps a lot to stay out of the danger.

Tomek made sure not to trigger unnecessary Vengences. He killed a couple of Ogruns on the bottom flank and cast Rebuke on top side unit. He carefully placed his Woldwardens and Megalith in order not to get dragged by my Tentacles. On both sides Mannikins sticked 😉 to the plan.

My plan for this turn was to keep pushing forward while remembering not to overcommit. The key in playing Anamag is finding balance between sacrificing your own models and having enough kept alive to retaliate. I’m still finding that balance. On both flanks I moved few Ogruns forward and kept the rest back. Unfortunately, Ammok was to far to get rid of Rebuke. I tried to spread out evenly so I wouldn’t get killed by flying AoEs and sprays. Unfortunately, on the photo you cannot see where my BB’s AoE landed. It landed directly on the hut.

In his turn, Tomasz started to clean the table methodically. He definitely had resources to do so. That was only a matter of time. Tomasz was killing one unit at a time diminishing my offensive potential. When dust settled, a big chunk of my army was gone. Tomasz scored 1 scenario point.

I lost a considerable part of my forces and this turn was to be crucial. I had to kill enough models and score scenario points so I would not stay too far behind. Sadly, Windstorm had a significant impact on Blightbringer’s range damage output. I managed to take out a WoldWyrd (I believe that was the turn when Tomasz reminded me not to use BB’s animus as I wanted to put fury on my colossal). I dealt a lot of damage, but I haven’t removed too many models. I scored 2 points, 2:1.

In his turn, Tomasz continued removing my Ogruns systematically. Teleported BE behind the forest killed couple more Ogruns. My bottom flank was significantly depleted. On the top flank I had more luck, Megalith used all of his fury to kill a single Warmonger. I liked how Tomasz handled Tentacles – TKed them out of Maw’s command range. Tomasz scored 2 points, 3:2 in Tomasz’s favour.

I was running low on clock and still it took me 4 min to get through my pre-activation phase. I believe my biggest issue in playing Anamag is time management. I managed to kill Megalith with my Blightbringer and kill some models on the bottom flank. Unfortunately I rolled bad with Gorag charging the Objective. I scored 2 points and had only 1:42 on my clock. 4:3 in my favour.

Tomasz had a considerable time advantage. BE couldn’t do much and killed only 1 Warspear (the UA). Sentry stones kept being annoying, really. Gorag got killed. Krueger run from the circular zone to get the bottom flag. 1 point for Tomasz, a tie 4:4.

Now I had even less time as I had to pass couple of tough checks last turn. Blightbringer killed the Objective. I cleared my circular zone and wanted to score a point on the flag, but unfortunately I didn’t have enough time and models to get rid of Woldwarden. I scored 2 points, 6:4 in my favour.

In his turn Tomasz had a clever plan to try to kill Anamag forcing to clock myself in case I wanted to use fury to transfer the damage. I’m not used to switching clock while transfering damage and in the end Tomasz decided not to do that, since the game was really fun and he didn’t want to win that way. The whole game was all about fair play and he found this move not friendly. Tomek scored 1 point on his flag and contested my flag. 6:5 in my favour with 5 sec on my clock… 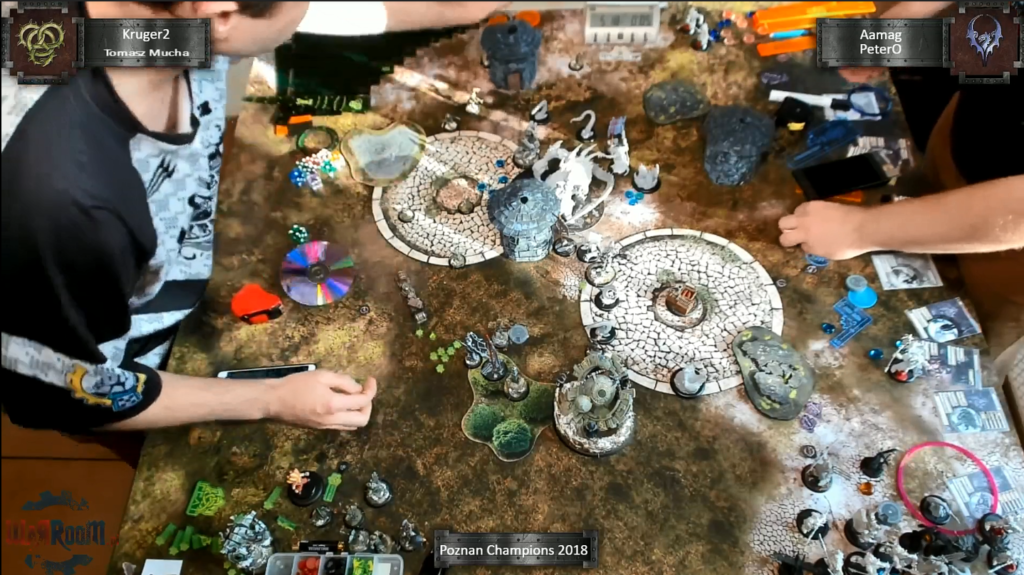 In my turn I only managed to reive fury from BB and pass the clock, Tomek scored 1 more point on the flag. A tie, 6:6.

In his turn Tomasz destroyed the objective, scored 1 more point on the flag and switched the clock finishing the game, since I had 1 sec left. 8:6 in Tomek’s favour. 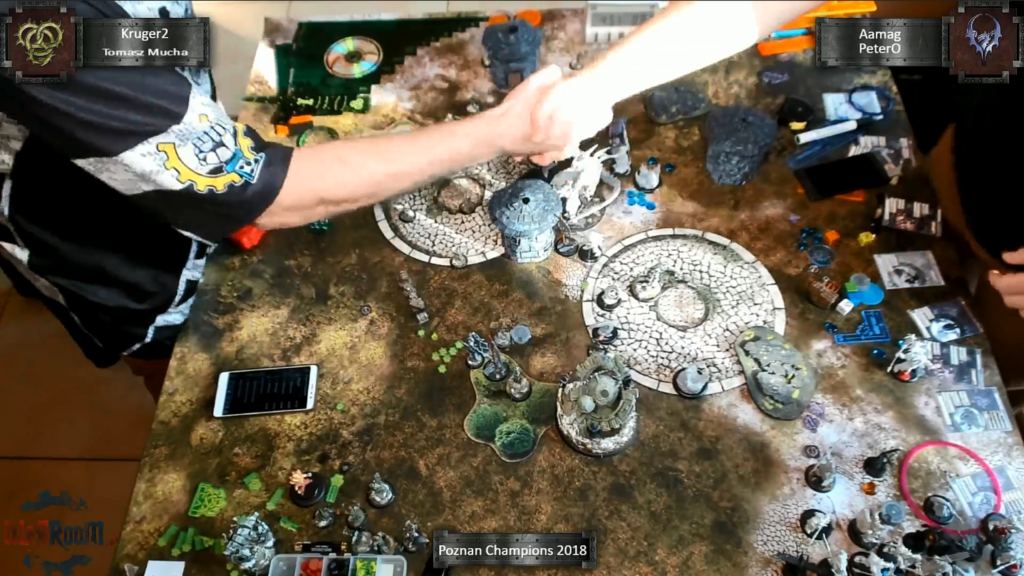 This game turned out to be really intensive. I must admit I expected rather one sided game and this kind of mentality made me lose it. Tomasz is a great player, but having a better plan and managing time better might have allowed me not to drop off in Rounds 4-5 like that.

Deffinitely my biggest mistake was losing so much time in Rounds 2-3. Unfortunately, lack of experience with this list took it’s toll. I should have realized that the game hasn’t finished in Round 3 and that the situation was better than it looked. This list can take a punch and then retaliate. Those Ogruns are really tough, and having only couple left can still be more than enough. I believe that if not for time, this game could go the other way.

Another big mistake was not printing the cards before the tournament. I’m not used to playing in WarRoom and it took a lot of time to check everything over and over. On the other hand magnetized damage dials from Qualitees&Qualigeeks helped to save a lot of time. I’m not trying to insert a rough product placement, I really mean it 😉

All in all, this game was fantastic and now I would play it with totally different attitude. Strong mentality is a really important asset and playing a list you know and you like to play with can improve it a lot.

I hope you will forgive me that it took me so long to finally get on with reports from the Champions tournament. In the games to follow, there will be a lot of Legion, believe me.