My opponent was Dziekan, one of the top Polish players and a WTC team member. He was training for the WTC 2018 tournament.

Firefly was proxied by the Charger

I know that everybody complains about dice rolling, but…. we both recorded that I rolled snake eyes six times in two key turns. My average rolls during a game seemed to be 4-5, and on 3 dice – 7. Dziekan’s to hit ratio was 99% as usual. 😉 Please keep that in mind when judging effectiveness of my models during this game.

I know Protectorate quite well, as I am playing against it often – but this was my first ever game with a Tempest list. I have yet no idea what matchups should it deal with. It seems ok against variety of opponents though, so I thought it should be ok against PoM too.

The idea of the list is to fight for the zones with couple of resilient jacks while the mages are free to stay away and safely shoot their pistols. The list has 6 true sight shots, to deal with some problematic abilities.

I think that the popular gunline Tempest lists and casters are a mistake. Such lists usually loose by points – I saw many times people trying to jam or clear the zones with the tempest units and it was usually a failure. They are too expensive and die quickly. They also don’t have enough ranged power in today’s meta and Thunderbolts are too easy to block to justify unit’s high cost.

Maybe I am wrong, but people usually complain about this Theme – so perhaps it’s better to try something different than a standard mk2 gunline approach. I decided to put some melee power in my list while keeping the mages as flankers and ranged support. I currently see only two options for such list: Haley2 or Stryker1. Both have good defensive feats to give the mages and jacks some time to work. I prefer Styker because of 3 useful upkeeps and 30 WJPs.

Deployment and first round:

I was going first. My opponent picked a table side with somewhat better terrain of course. I deployed mostly symmetrically. Reclaimer deployed Idrians on my left (supported by the knights) and two exemplar units on my right.

Stryker cast Blur on left Blazers (to protect them from Idrians), Snipe on Black13 and Arcane Shield on right Centrion. He hid in the hills.

All the mages stayed out of opponent range – no point in losing them early.

Reclaimer’s army ran forward, using clouds to hide some models. Idrians used their minifeat and had Hand of Fate. 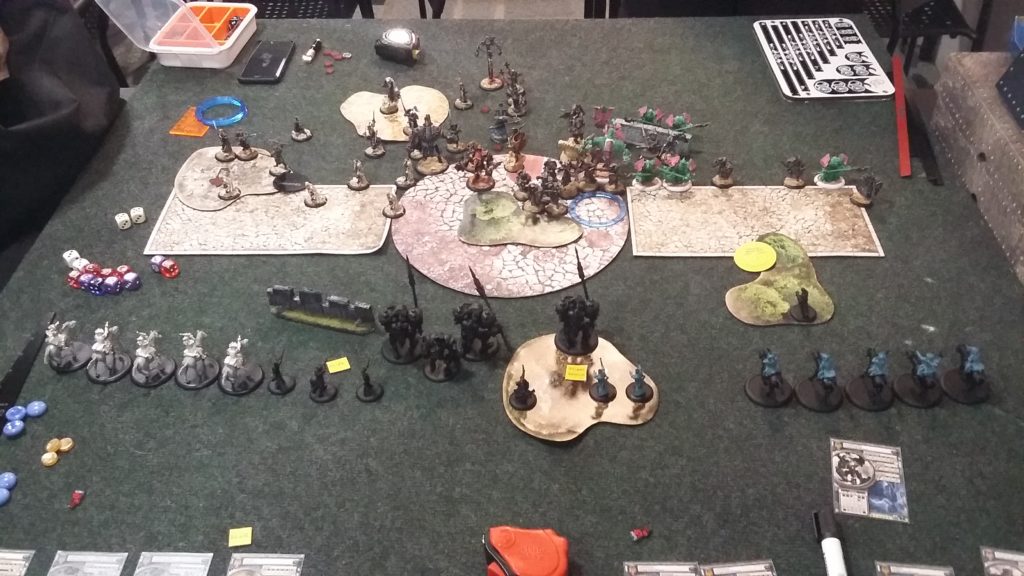 I forgot that Fire of Salvation dispels magic, so Stryker moved Arcane Shield to himself (for future protection from Idrians, if they try anything) and used FEAT.

Firefly and Blazers shot Centurion killing some Idrians with the lightnings. Blazers repositioned behind the wall, into the Feat bubble.

Right flank blazers and Captains shot poorly – killing only couple of models. Most Blazers parked in the Feat. Falk stayed out of sight, waiting for better opportunity.

Exemplars massacred right Blazers with the crossbows, having no problem with their def or 18 ARM.

Left and right flank were jammed with infantry and Seneschals. Jacks stayed behind the clouds.

Seneschal slammed right Centurion out of the zone. 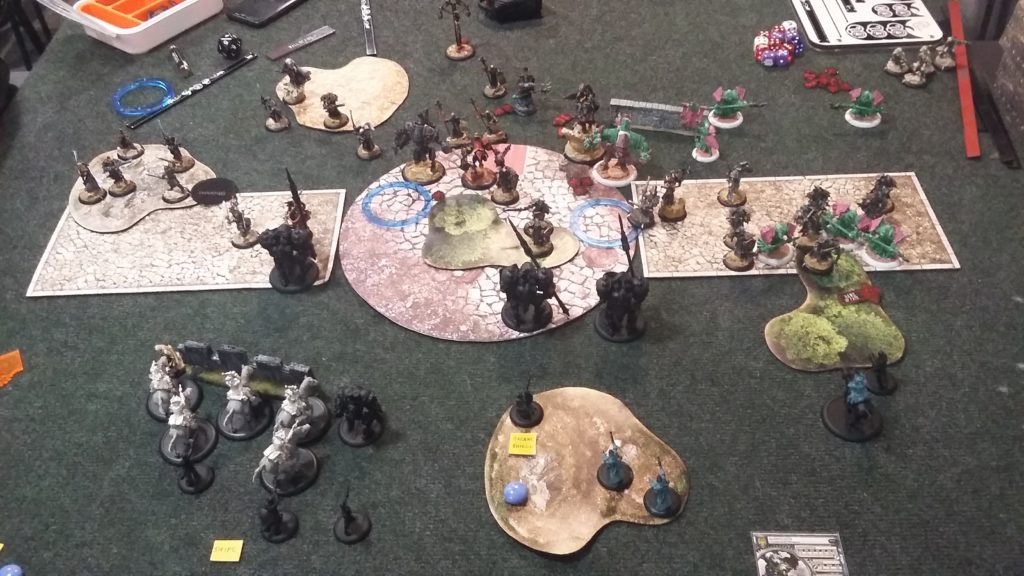 My left flank mages and Firefly (I moved Snipe to it) shot poorly, not killing much. They managed to kill some Idrians and knights but less than expected. I put some damage on the objective. Centurion killed Seneschal

On my right flank Falk jumped out of cover, having many Errants and a Bastion under his pow14 spray. He killed…. two models, missing three I think.

Right Centurion moved back into the zone, missing most of his attacks.

My last Blazer and the Captains shot some Exemplars.

I paid attention not to kill anything within 5’’ of Fire of Salvation – so he could not reach my Centurions without trampling.

Crusader ran to engage left Centurion and a Firefly.

Protectorate infantry dealt heavy damage to the Centurion, despite the Polarity Field.

Fire of Salvation trampled and killed him with two attacks.

Errants and crossbow solo killed all my models around the zone.

Seneschal slammed my middle Centurion so far that he couldn’t reach the FoS next turn. 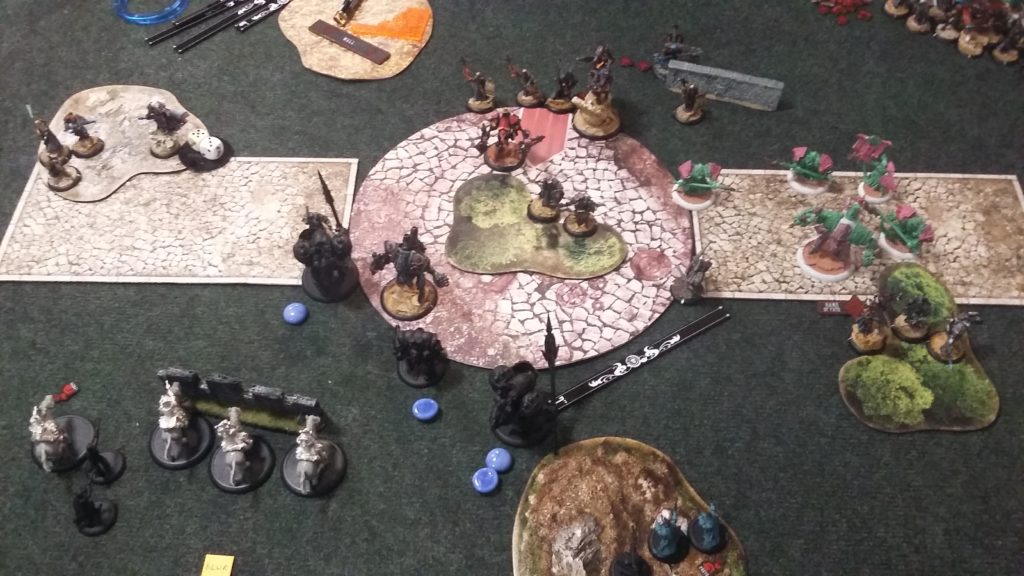 On my left flank my mages shot objective (score 1:3) but not the swordsmen so I could not score in the zone. Left Centurion and Firefly didn’t destroy Crusader due to a bad dice rolling.

My right Centurion could only jam the zones with the Polarity Field and kill Seneschal – hoping to survive for the next round.

We checked the possibilities and decided at this point that the game is as good as over (I also wasn’t to eager to keep watching how my dice roll ones only 😉 ).