My opponent was Dziekan, one of the top Polish PoM players who just started collecting the Mercenaries.

He played (I think I am missing something in the list – perhaps Dziekan will verify it later):

I wanted to test two things – to check if after switching to anti-heavy battlegroup (second heavy instead of chargers) the list can still deal with infantry. And to test cavalry instead of Stormguards. I didn’t know what mercenary list Dziekan will bring and I have never played against the Cephalyx before. I knew the feat is powerful and the Cephalyx have strong “anti-everything” potential – that’s all. 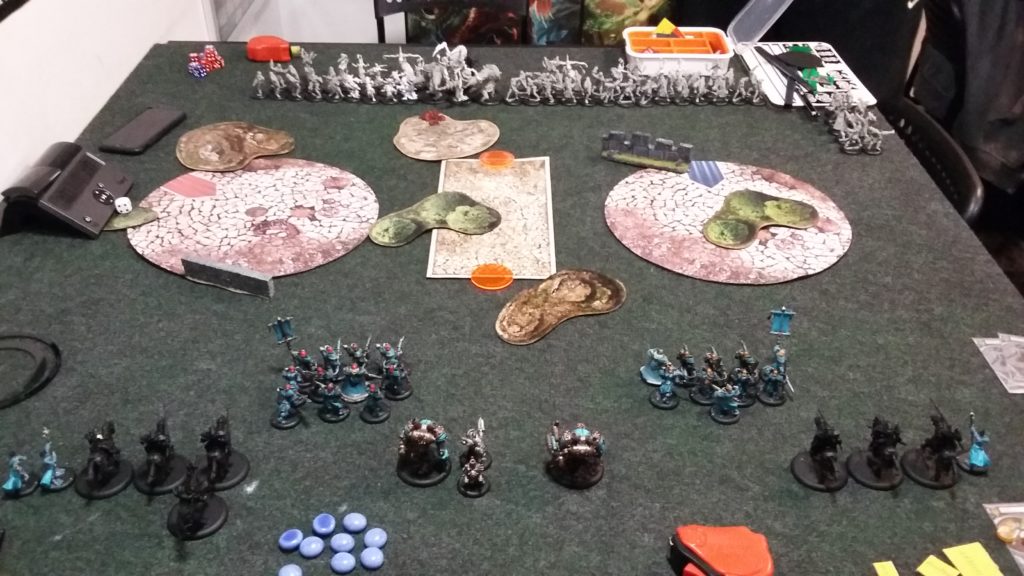 I was going first. My opponent picked a table side with convenient rubble. I deployed symmetrically with Triumph on the right. My swordsmen moved in advance. One small cephalyx unit was in ambush.

I ran in the wide line to have good shooting and charge angles next round. Siege gave Explosivo to himself just in case. 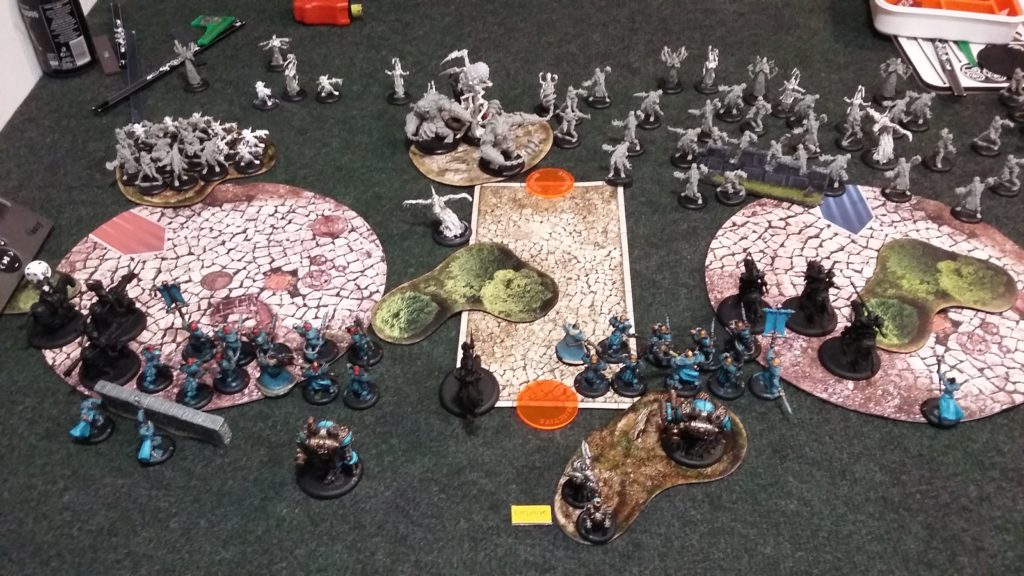 Having the monstrosities in Siege’s range and not having any better targets, I decided to use the FEAT – but only against one Wrecker, because I didn’t want to be assassinated next turn.

Siege rolled poorly for the Groundpounder under Feat, not dealing much damage. He also killed Wraith behind the wood. Triumph and Defender shot as well – having average rolls. I had to charge with two Stormlances on top of it to finish the beast off.

The infantry used their minifeats (+3 ARM) and assaulted while the cavalry charged the cephalyx horde – not doing much (Dziekan passed about 90% of toughness checks).

In response Dziekan used his ambushing unit on the left flank and the FEAT to maximize sprays usage. The drudges and some sprays basically removed all my units from the table. Dziekan rolled 90% of 7+ (more than 20 consecutive rolls) 6+ and 8+ rolls. That’s actually usual Dziekan’s rolling when it comes to hitting something – so no surprises here! 😉 He even forgot that Cephalyx trinity gives +1 bonus – but apparently he doesn’t need that. He was also killing cavalry with one strike/shot mostly.

He also scored 1 point in the right zone. 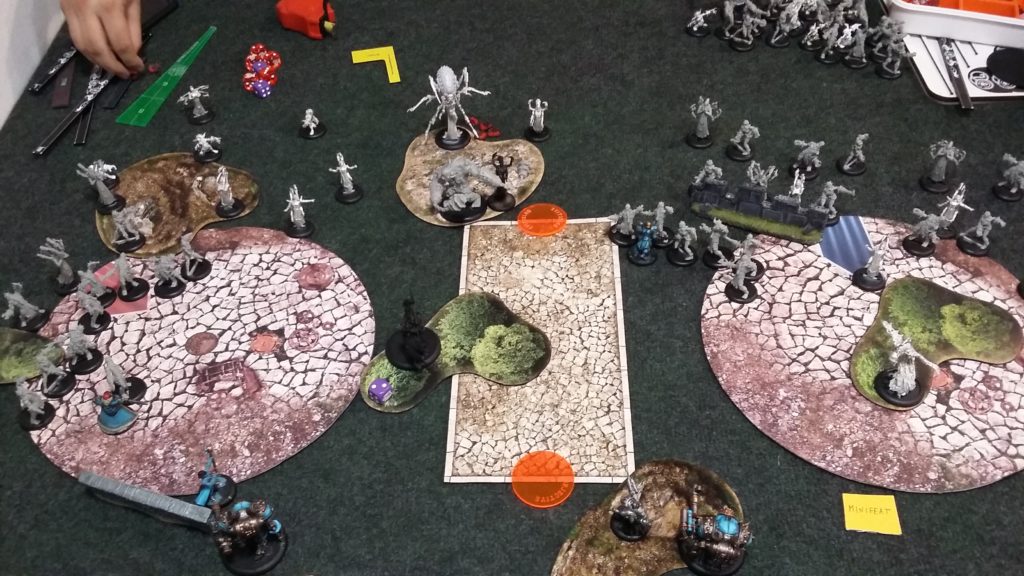 So I was left with my jacks, couple of solos and two guys from the units. I tried to remove as many threats to my jacks as possible – mainly frontline drudges and unit leaders and keep the zones safe. Dziekan was running out of time faster than me – my only chance of winning.

Siege shot 7 cephalyx (leaders and drudges)…. killing one…. (almost all tough checks passed and I missed the leaders). Triumph charged one Drudge and shot another unit’s leader to death. Katherin impacted, assaulted and engadged some Drudges…. and killed one guy (again – couldn’t penetrate ARM15 with pow10 lightnings and again – tough checks passed). The stormblades hit something but guess what – TOUGHNESS!

In return, the Machine Wraith moved my Triumph out of the zone. Thexus teleported the monstrosity and she killed the Triumph.

I decided that the game is over. 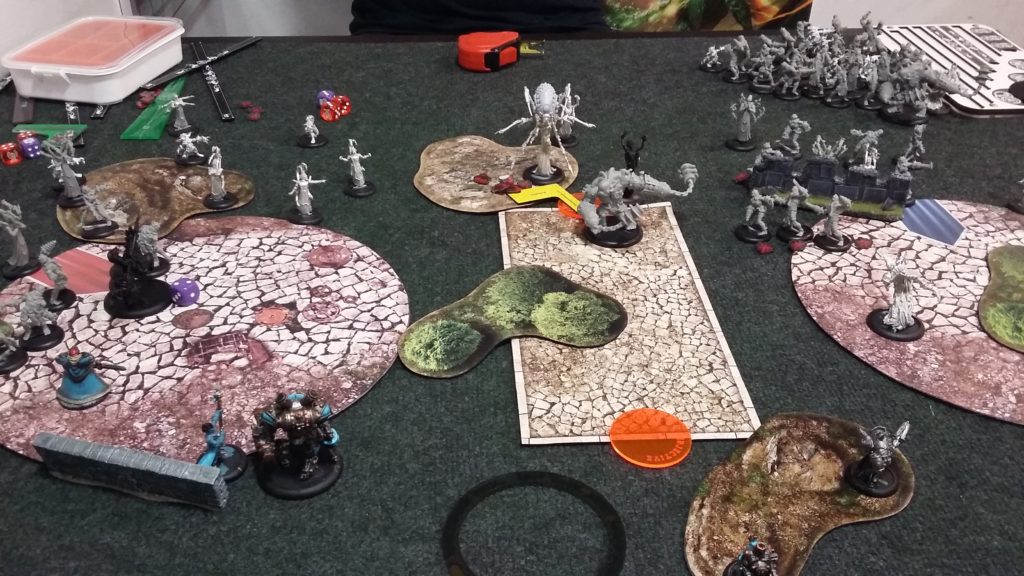