Hello and welcome! Here is my last report from February 2018. I choose to plays some shooting list led by loved and hated Calandra:

I played against Maciej (aka Cień – the Shadow) and his Sled Lilly:

I won the start roll thanks to +1 theme bonus and choose to go first. Maciej gave me the sadder side of the table 😉 It was my first game with this list so I deploy randomly: Highwaymen with Braylen and Gobber Chef to the left, Bushwhackers in the middle, Sons of Bragg just behind them, Cally with Bombers to the right, where that sweet wall were. Stones guys in the back.
Maciej explained what Lilly can do, and it was not a good news for me: firstly – Wind Wall (so it shuts down my shooting), secondly – threat range 28″ (trample + weapon rng). “Ok, I’m screwed up”, I thought. I can try scenario. I run a little forward, put 18″ Star-Crossed bubble and drop some fury to the Stone. 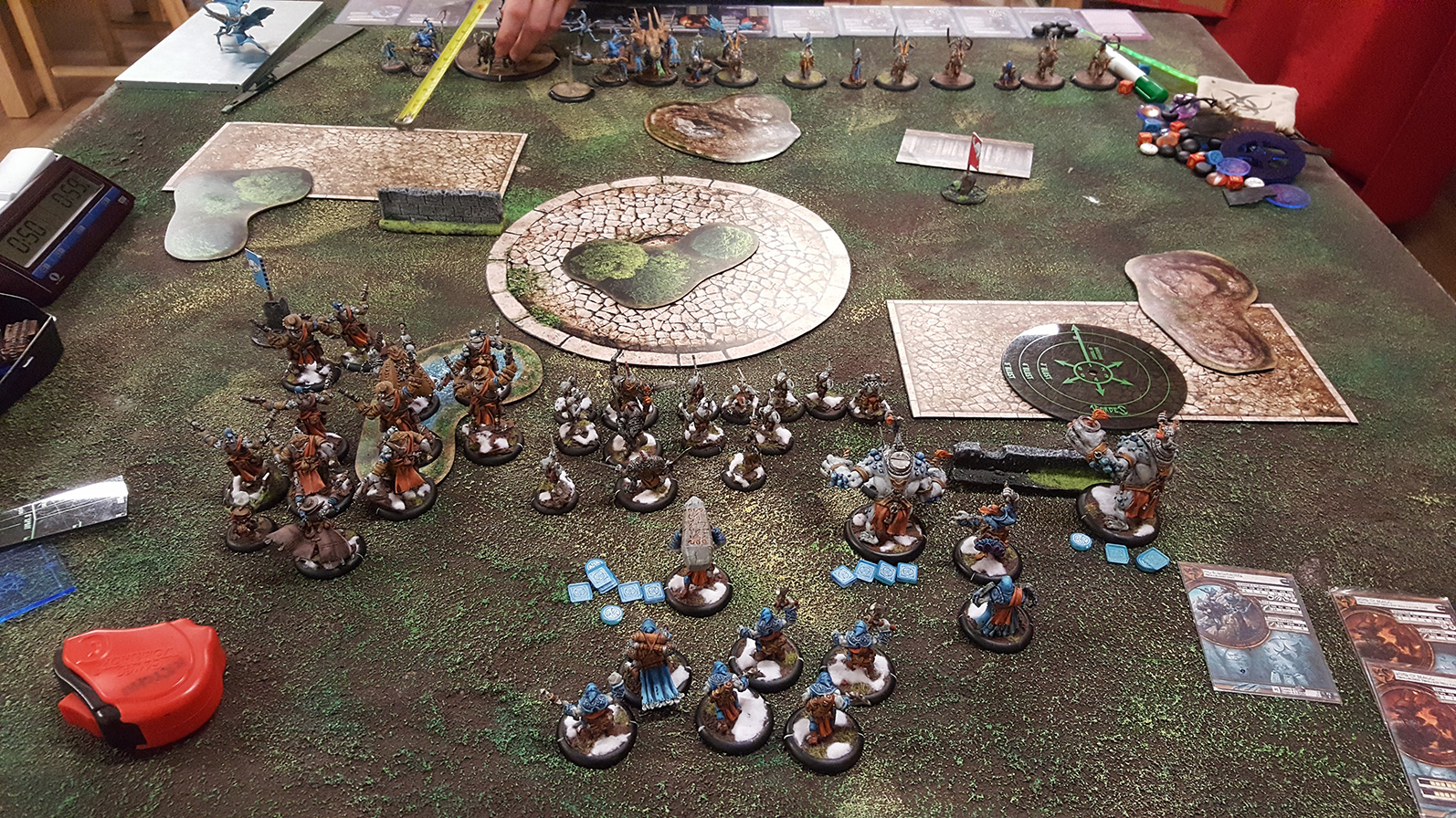 Sled comes closer, kills 2 or 3 Highwaymen and repostion back. On the right side 4 Raptors park far back (but not too far for the Bushwhackers, hahahaha!). Ravagore comes closer and spits her corrosion AoE in between the lake and the forest. Beast stayed glued to the Lilly (Wind Wall).

Trolls turn 2. Gobber runs to the flag. Bushwhackers kills 4 Raptors (one died to lucky deviation form the Mortar). Bombers slowly and with dignity enters the zones. Sons run to the middle, but they did close to nothing the whole game, thanks to smart control by Maciej (no pathfinder did not helped against that forest and lake too). 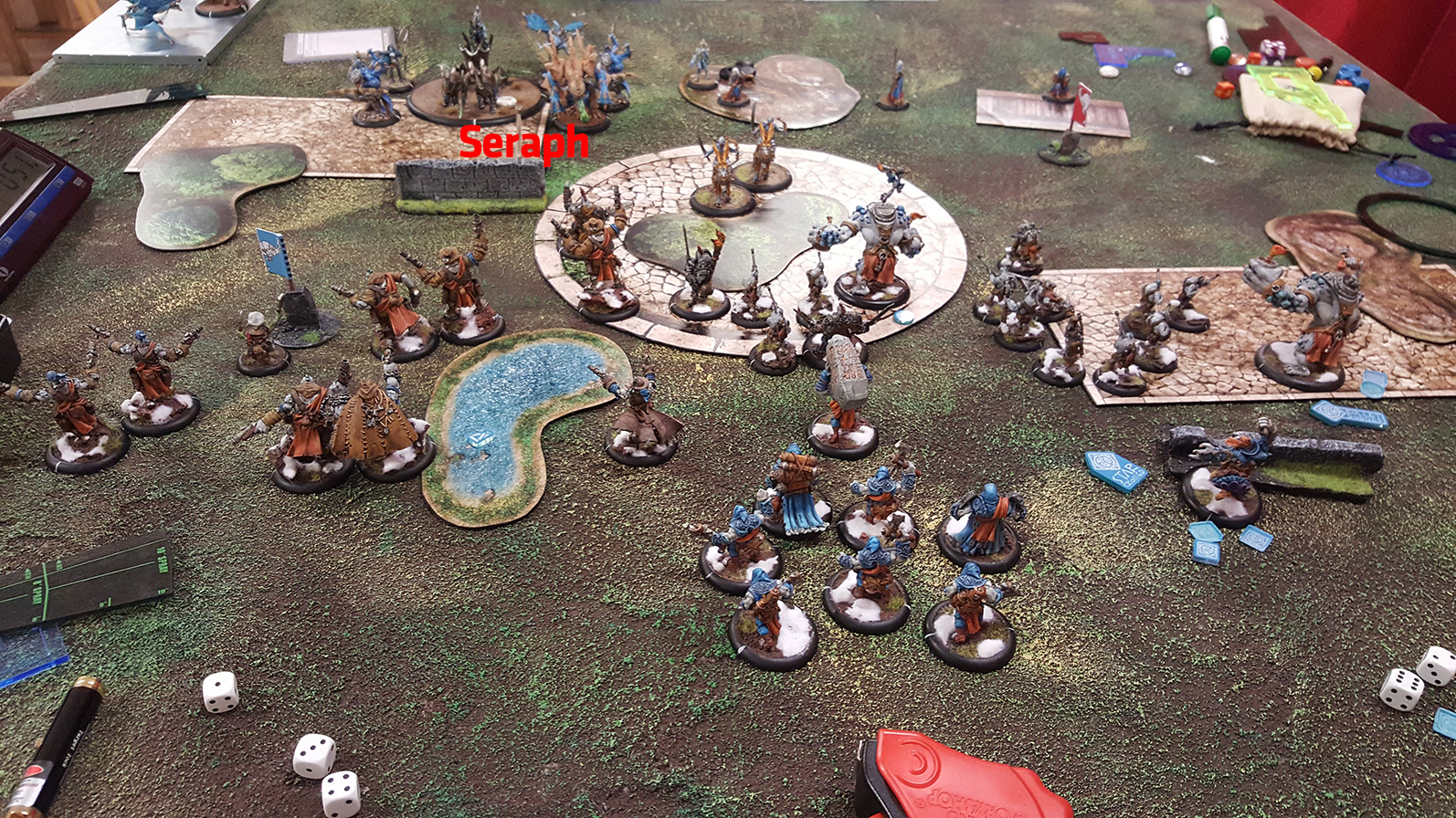 Legion turn 2. Sled kills a few HWM, shot Gobber and Braylen ( 🙁 ) off the table. Thats leaves me without solos on the left flag. Something killed Bushwhackers Mortar. Remaining Raptors attacked Bomber, but they missed it under Star Crossed. Ravagore puts AoE again. Some Legion solos park near Lilly to be safe and to grab mine flag next turn. We both scores rectangular zones – 1:1.

Trolls turn 3. I ambush with Lookouts from the left and charge the solos killing them and hurting Harrier. Bomber killed 2 Raptors in melee. The other one shoots somewhere. Bushwhackers shoots. Sons and HWM did nothing because they are weak. 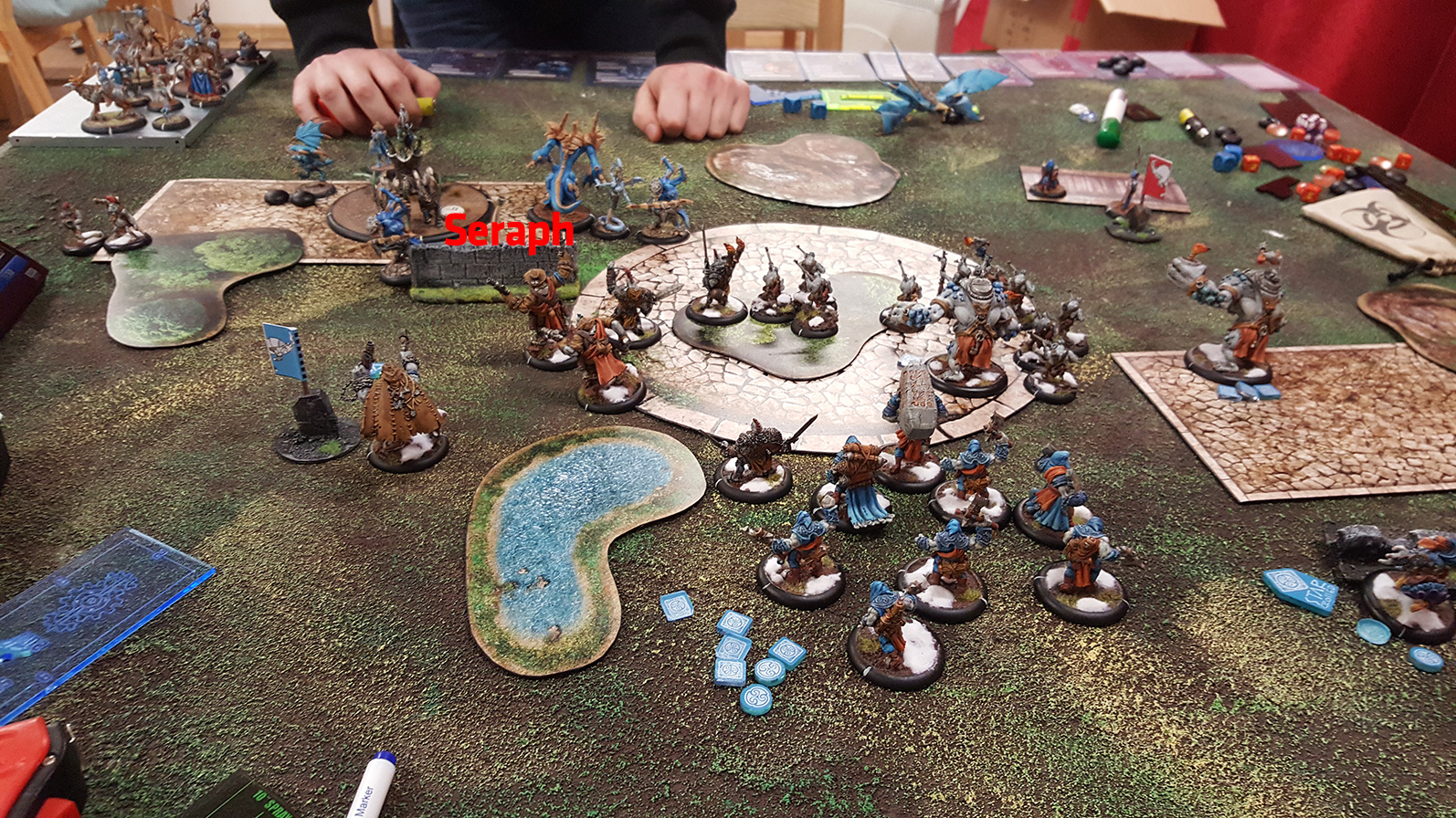 Maciej turn. Ravagore – AoE. Sled are on my flag. HWM died. Lookouts died. We scores and its 4:2 in Legions favour.
I FEAT. Bombers murder Ravagore. Pygs murders all that left on the right side and hurt Bolt Thrower. Sons did nothing except one who runs to engage Bolt Thrower. I left 3 fury on Calandra, so you know, I can transfer, but guess what? I have both bombers full on fury… In a desparation I run Stone members to cover Canaldra and contest flag. I score some points, but don’t remember how many excactly. 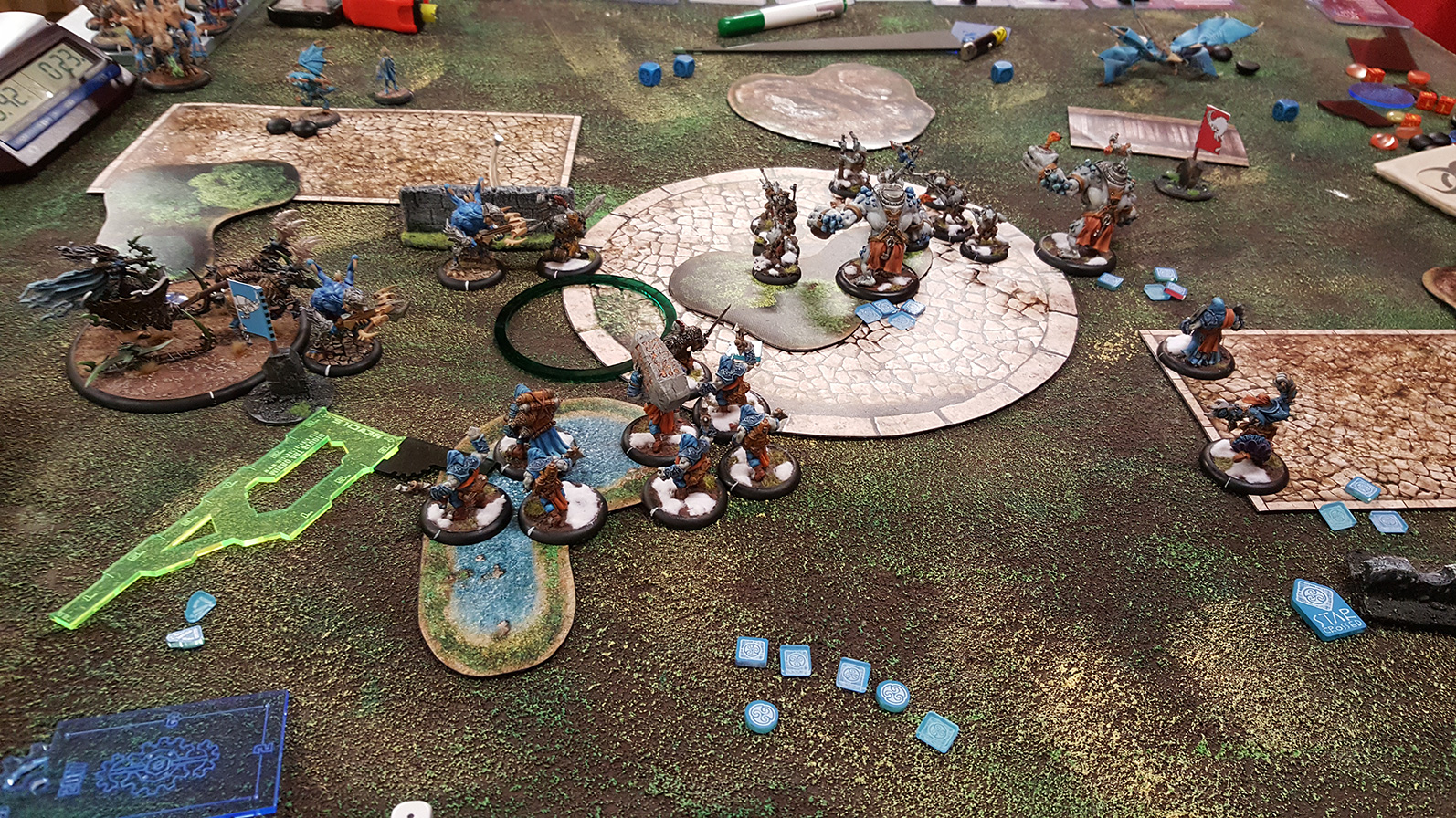 Maciej start what he likes the most – assasination. He had less and less models on the table to score, so killing Calandra was a good idea. Lilly froze Cally. Seraph rolls for number os shots – 1. After some activations Cally is on 3 boxes. Last shot – Bolt Thrower – hits! Damage is enough to kill her, but – she tough! No more shots! In retaliation Stone members moved away, Pygs and one Bomber shoots Lylyth down. Trolls victory. 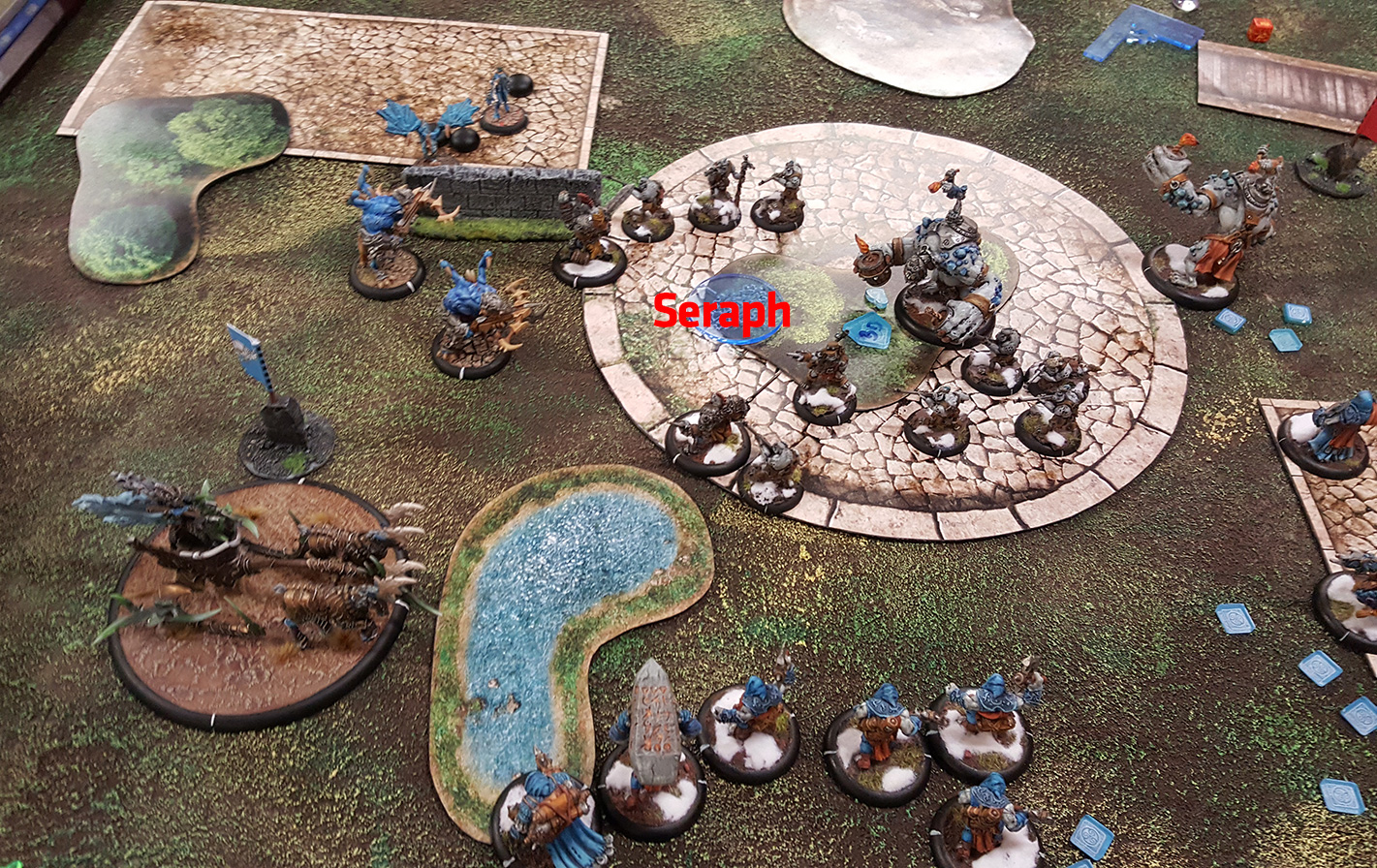 After that game I had a false sense of this list power. I took it to one tournament and lost badly 😉

As a side note I want to share with you some scary list I played against that day. It was lead by Damian, our local Skorne player. Unfortunately I forgot to take pictures, so I can’t report it the right way. I played my Madrak1 list. The game ended miserably with Tiberion to my warlock face… The list had a great mobility, hitting power, but what I really liked is flank bonus provied by Krea to Drakes. It was build as an anti-infrantry drop. Here is the list: