Hi! It’s been a while since my last report, so there is a new one, from March 2018. This time I decided to try Doomy1 in Band of Heroes. My opponent, Kamil, was playing Bradigus in Bones theme. Lists:

I won the roll and went first. I deploy Fennblades and Champions to the left and battlegroup to the right. Carefully, but a little to fearfully, I run forward.

Kamil gently moves his toys to the edges of the zones. Mannikins widely.
On my 2nd turn, having scenario in mind, I moved to the zones: on the left side I run a few Fenns to engage enemies. In the middle i park Axer and Mulg. I thought my character beast is safe with arm 21. I was wrong… Bomber shoot at the Woldwatcher in rubble: 1st bomb hit and did a lot of dmg, second miss and deviated into Stonehaper behind, killing him. Gobbers put a clous on front of Grandpa Doomy. Gobber Chef runs to be annoying.

Circle turn 2. On the left Fennblades were murdered, on the right Woldwatcher cast his animus. Gobber Chef died. Bradigus FEATs and suddenly 2 heavies are closer to Mulg and my objective… Woldguardian charges Mulg and with his 1st attack he used Ram knocking Mulg down – that means I cannot use Primal Rage and retaliate. Guardian with Woldwatcher combined killed Mulg and objective (those heavies hits with p+s 21…). In my opinion that was the end of the game 🙂 But ok, let’s roll some more dices 🙂 Beasts moves back thanks to Bradigus feat. Kamil scores a point – 1:0. 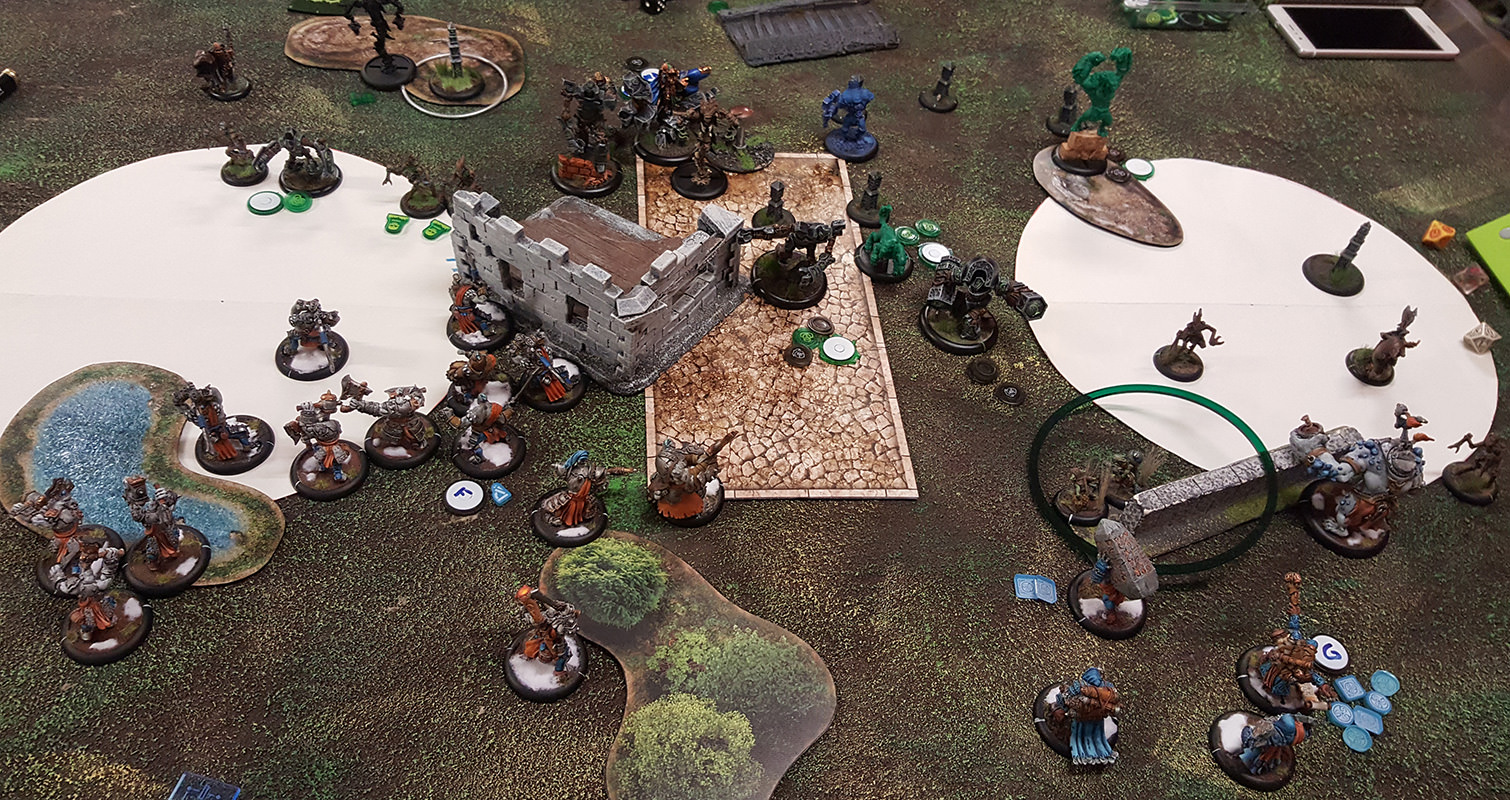 Trolls turn 3. Fenns vengence and kills 2 Mannikins. A few models (including 2 Champions) charge Woldwatcher, but due to unlucky roll he survived. Axer and Champ Hero charges Woldguardian, but this one is tough and they barely scratch him. Doomshaper comes closer (beacuse Bradigus reduced my spells range by 5) to tricky use Rampager. I successfully cast it on Woldwarden, and moves him to hit his buddy, but he misses 😀 It’s my FEAT time. Fell Caller runs to the edge of the middle zone. Bomber kills one Mannikin in melee.

Kamil set on fire my clumped models in the left zone (Wold Wight animus Spontaneous Combustion). He made some rough terrain in front of the Champions. Axer and Fell Caller died (no pathafinder for Champs). Bradigus push Stone Elder out of the zone. Kamil scores. 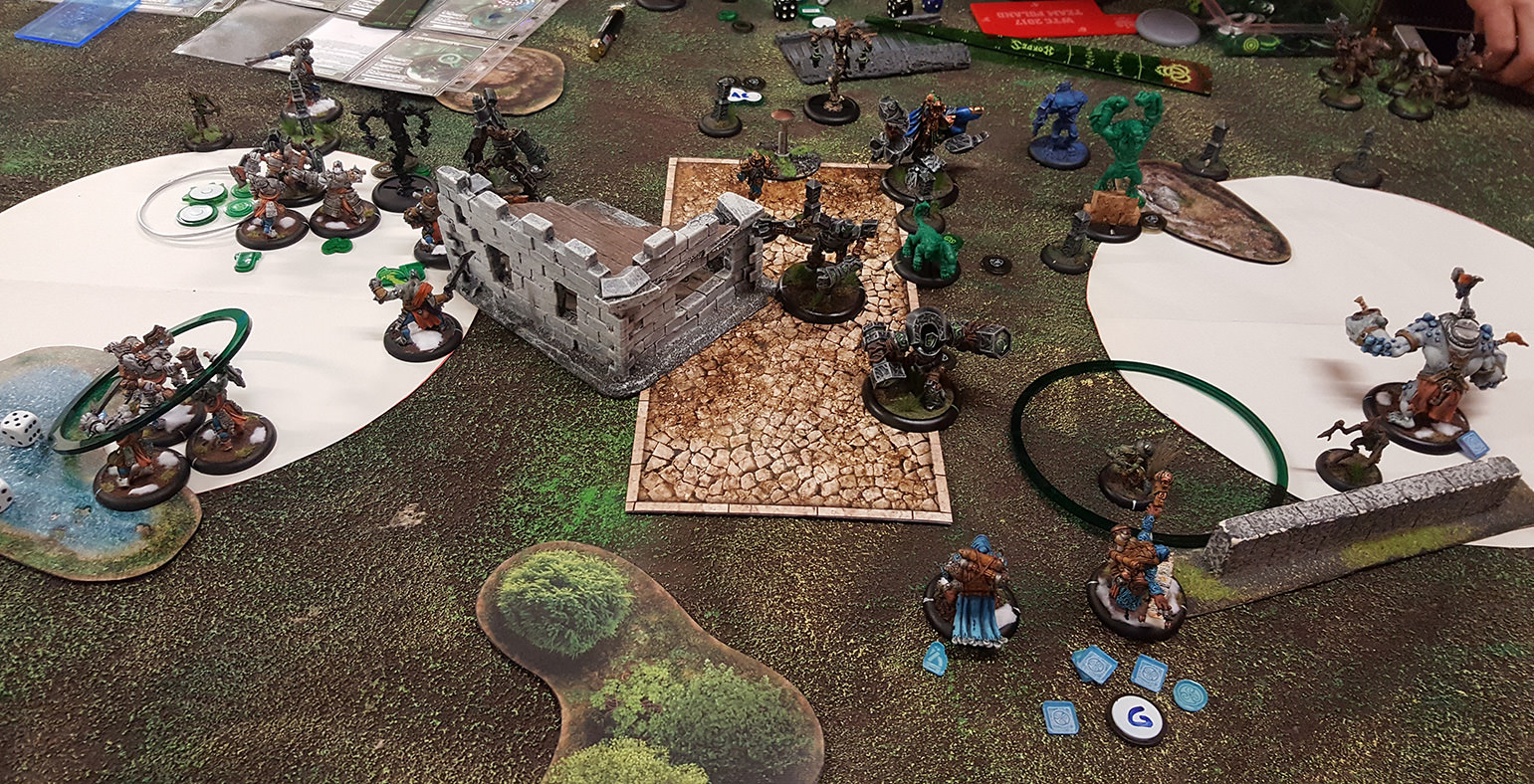 Only a desparate try to kill his Bradigus is what left for me 🙂 Unfortunately Bradigus camps 4, so it is impossible… Anyway – we tried it to see how far can it go. A single Fennblade in the back lack LoS to Thorle. Doomshaper puts Fortune on the Bomber and cast 2 Strangleholds on Bradigus, but does only a few boxes. Bobber charges a Shifting Stone, kills it and Goad to Bradigus. He hits his second initial and 2 additional attacks which all can be transferred. Kamil easily scores to win 5:0 on scenarion next turn. 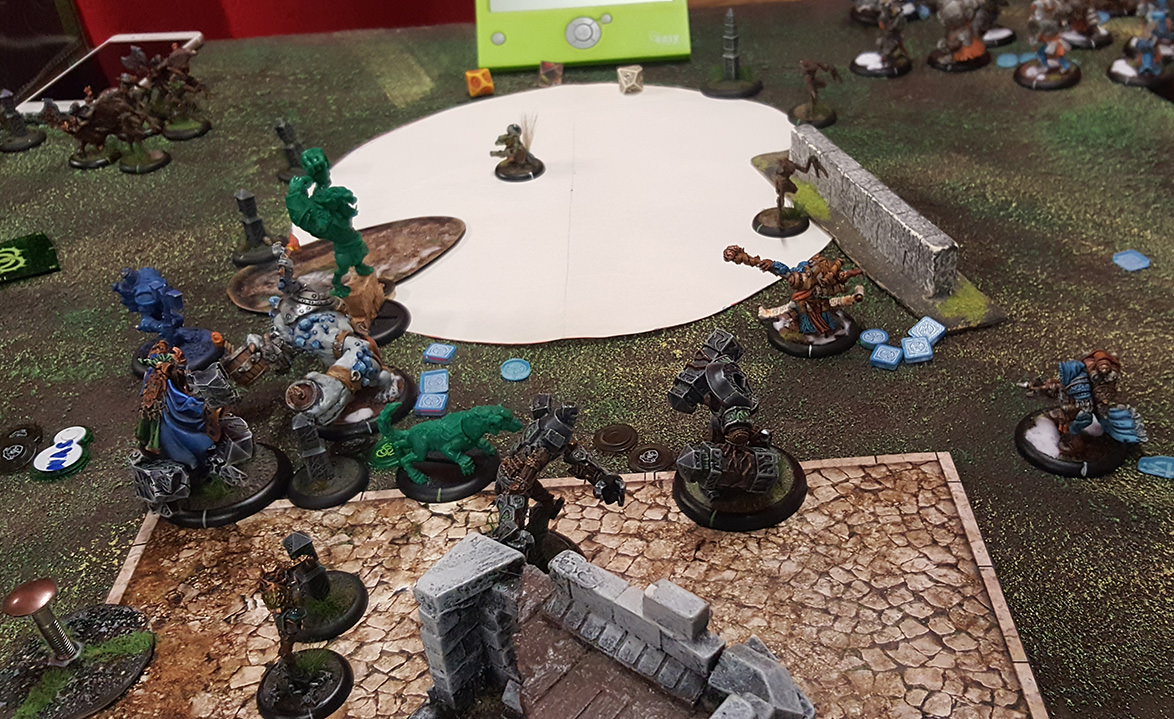