This time I had a pleasure to playtest my list with Jakub. Jakub is learning his Thyra’s list and I wanted to learn more about Thagrosh2. I won the starting roll and without hesitation I took 1st turn, Jakub chose a side.

Again I had to proxy a bit… BFS played as Ice Witches, Ravagore’s torso played as Neraph, and an orange proxy base played as second Hellion.

I deployed my army symmetrically, Angelii and Hellions on the flanks, Thagrosh in the middle, bests somewhere between warlock and flanking Angelii. Ice Witches behind all that.

Jakub deployed his light cavalry on the flanks with intention of performing flanking maneuvers. Thyra placed in front of the hill, in the middle, surrounded by temple infantry. Warjacks on both sides of that clump of models.

As Jakub had nothing to shoot with I decided to gain as much board space as I could. Thanks to the theme bonuses I could start game with 2 upkeeps, Aggravator on Thagrosh and Dragon’s Blood on Typhon. I Slip Streamed said warbeast and one of Angelii. All warbeasts except Seraph run forward. I even charged with Thagrosh.

Jakub advanced cautiously as he was overwhelmed with my threat ranges. I must admit that having 1st turn in this Match Up helped me a lot. Thyra cast Gates of Death (teleport 6″ at the end of the turn) on herself and Silence of Death (+2 STR and Take Down) on the big Temple Guards unit. Light cavalry run on both flanks.

It took me a while but I decided that I should go with the momentum and keep pushing since I gained the board advantage. Thagrosh walked up to the left, Slip Streamed the left Angelius and cast Manifest Destiny. I used my feat. Ice Witches cast Puppet Master on models that were about to take action this turn. Left Angelius charged the distant light cavalry unit and with overtake and additional attacks killed 3 Flame Bringers and Nicia. Typhon advanced forward and sprayed to death 6 guards, damn toughs! Seraph killed rightmost Flame bringer. I run with Shepherd in order to be able to force the charging Angelius. Said warbest fearlessly charged the right cavalry unit, but so clumsy measurements and we were not sure if I could overtake to 3rd model, so I finished up his raid with just 2 Flame Bringers. Neraph and Protector stood there and watched what was going on from a safe distance. Hellion failed to kill one of the Flame Bringers on the left. Thanks to my feat I moved left Angelius, Typhon and Seraph backwards to keep them safe from retaliation. 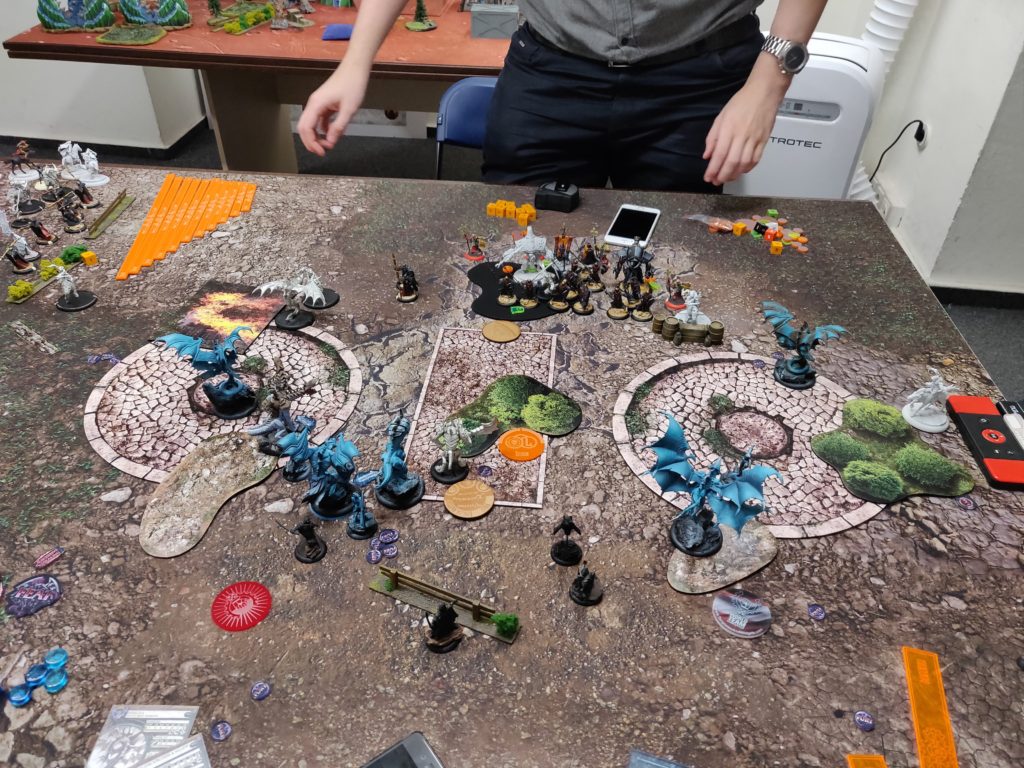 Jakub didn’t expect that many models to die and at this point the tides of battle were already going my way. Jakub put Daughers into play, on the right flank though, in order to gain advantage there. He quickly handled the right Angelius. Left Hellion survived a little bit more, but finally fell down to two charging guards. Jakub shifted his army towards the right edge where he had number advantage.

In my turn I quickly handled left circular zone. I should have sprayed with Typhon instead of charging into melee, I was afraid of missing my spray attacks, but to be honest this play could have costed me the game, as Typhon was far far away from enemy lines. I Slip Streamed Angelius and one hitted the Objective, I moved with overtake and tried to kill a couple of guards, but failed misserably. With Angelius’s animus I made sure there was nothing contesting my zone. Seraph now could kill Phyrrus as he wasn’t in B2B contact with any guard. 3:0 in my favour.

This turn I had to kill his heavy warjack, otherwise he would flood the zone and I would be close to losing on time. After a while I decided to charge with Typhon. Ice Witches used their witchcraft to make me feel comfortable about not missing important attacks. Thagrosh moved up, Slip Streamed Typhon and sprayed Anastasia to death. Typhoon charged Blood of Martyrs and killed him easily. Neraph killed a couple of infantry models. Forsaken with pathfinder from my Objective moved up and blasted 3 Daughters, 1 Flame Guard and one Flame Bringer, rolling 6,6 on dmg roll! Seraph flew to safety. I contested the right zone with last remaining Shepherd. 4:1 in my favour.

At this point the fate of the game has been already decided and we agreed to call it a day, as there was nothing that Jakub could do to prevent me from winning on scenario.

I must admit that I enjoy playing Thag2 more and more. The list itself is hitting really hard and has some infantry answers. I am afraid that a list with a lot of heavy armoured models might be an issue, but I will find out soon enough, as we’re having a local tournament here in Warsaw. 24 players are coming!

We discussed with Jakub what went wrong and we agreed that 2nd round was the crucial moment when he decided not to run forward with his guards, as shield wall didn’t keep his models safe. Jakub didn’t expect that many guards to die this turn and wanted to use Iron Zeal in the following turns. This way I could just commit, kill what I could, and move backwards with my feat movement while being safe from Jakub’s retaliation. On the other hand I messed up with Typhon walking away what potentially could have costed me the game. Fortunately Slip Stream makes difference.

All in all it was a great game and nice Thursday’s evening. I’m looking forward to play with Jakub again.

This weekend I will take part in a 4 round local tournament so keep your fingers crossed. I will pair this list with handicaped Anamag, as I still don’t have Chosen… and my Hellmouths still haven’t arrive… in this case I should play Thag2 24/7 😛