Hello everyone! This report is from August 2018. I took my Madrak2 list which I was tested as a pair for Jarl in SotN theme. My opponent was Kamil – but not that one who played with me last time. We have 2 Kamils playing Circle in town 😉 To separate them – this one I will call by a nick – Kamo. He tested Iona1 during Circle tharn CID cycle (week 1 if I remember correctly).

The idea is to be as simple as it could be. Hard hitting infrantry (thanks to Fury) and MK. Threats are serious from any model in the army (even charging Stone Scribes are p+s 11, counting stone strenght, 4 dices on dmg on charge, and mat 7 thanks to Fell Caller). MK – if you ignore him, he eats you. Only a gunline list, even medicore, shuts it down… 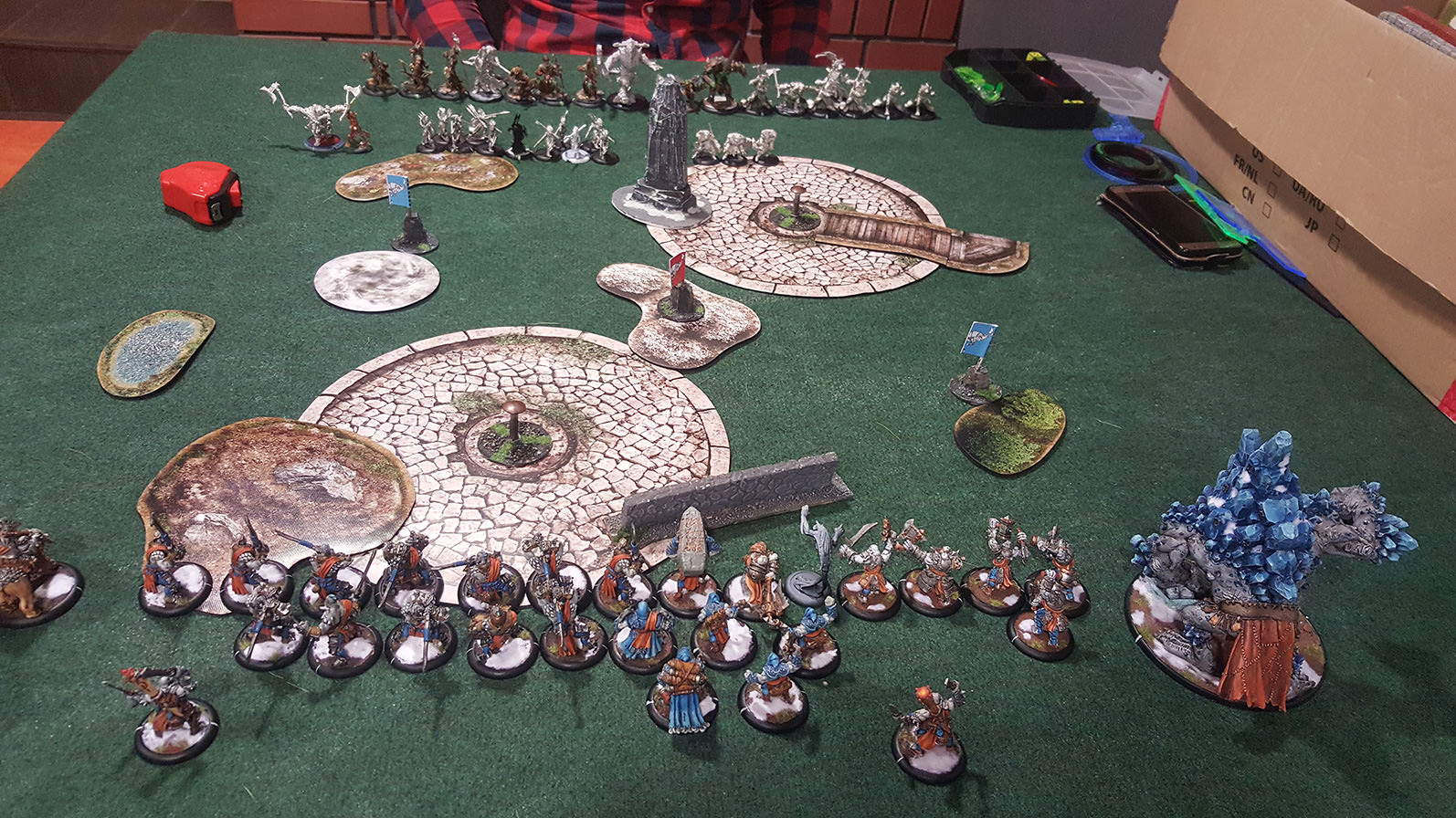 Kamo started. I put my models on 12″ thanks to theme bonus. Tharns are fast and our lines are close to each other, so after Circle moves, everything threatens me on next turn.
I run 4 Fennblades and 2 Long Riders to jam enemies. Champions moved a little forward supported by MK just behind them. 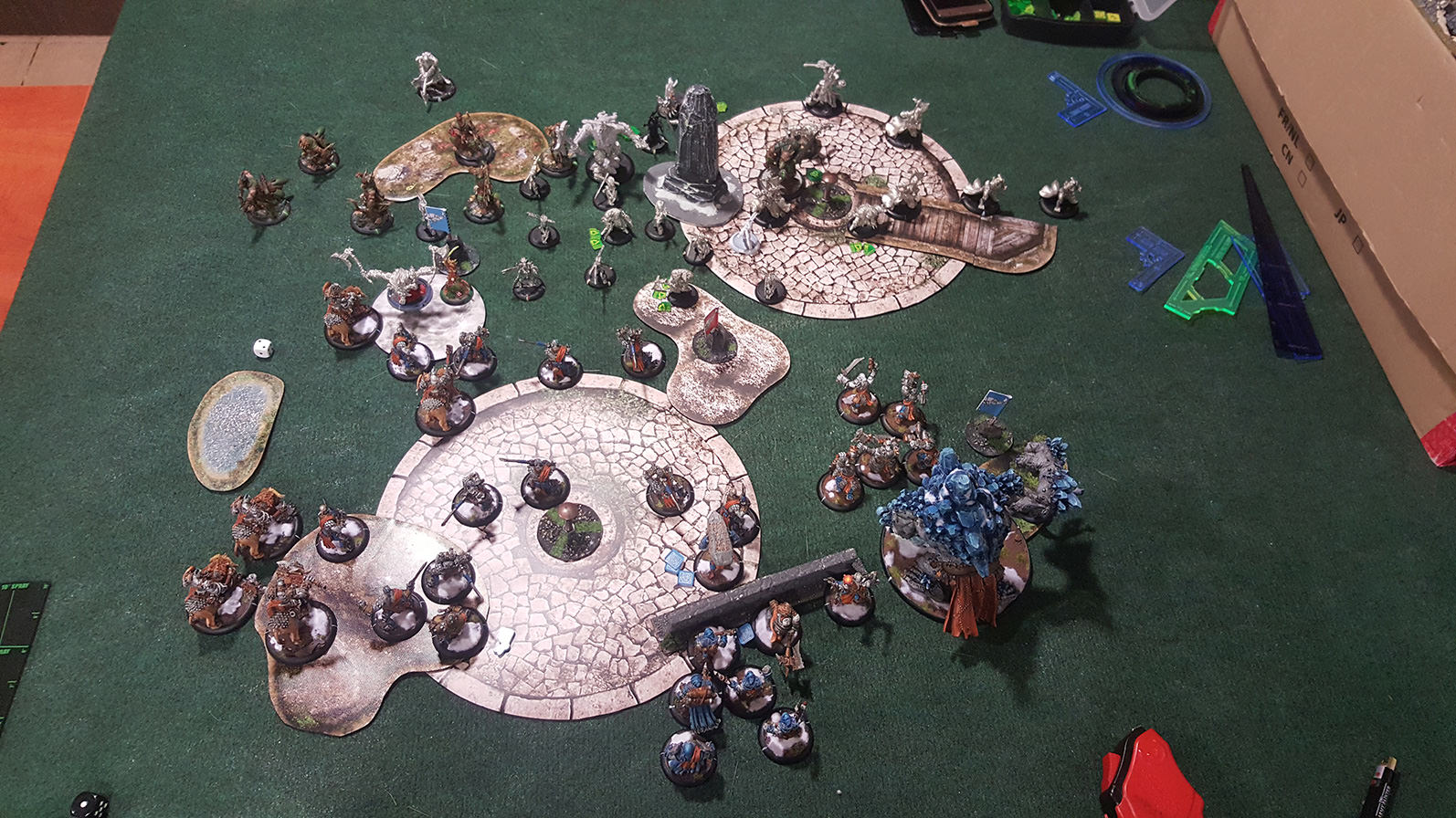 Kamo activated Bloodtrackers and kills a few Fenns (with prey). After a few shots he used minifeat to change their prey for Champions and last 3 shots hits Champs spreading some dmg over a unit.
Caleb (from Death Wolves) got Divine Inspiration. This single guy surf through Trolls like a mad, killing a handful of models and stopped in my deployment… Left Ravagers and Caul killed both Riders. Brighid shot at Fell Caller and he survived only thanks to poor dmg roll. We realized that she can work as a great solos removal tool. Brighid have great range, good rat and dmg (with prey).
Trolls time – I lost more models than expected (you damn Caleb!). Madrak moved forward to have as many models as possible in control and FEAT. He also put Blood Fury on Champions. On the left Fell Caller gave +2 mat to Long Riders, but they failed to kill Death Wolves… Stone guys surrounded Madrak. Champs with +2 mat killed some and missed some more Bloodtrackers (and Iona gave them Dodge). MK killed one Tracker and hit and objective for about 1/2 boxes. Feralgheist got a point from the flag. 1:0 for Trolls, but it looks pretty bad for me. 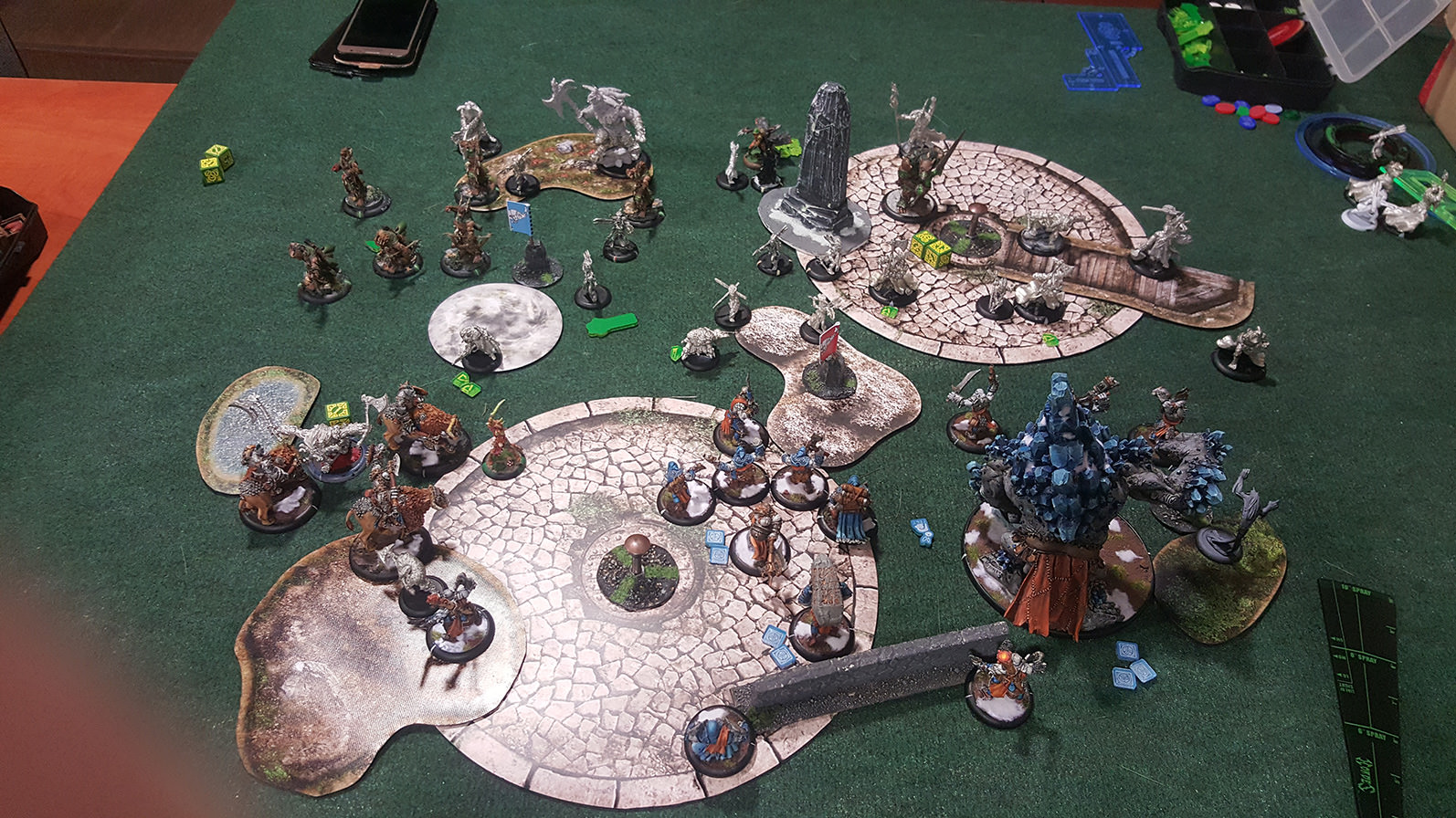 Kamo – Iona used FEAT (+3 strenght and arm for Tharn models) and park in the white forest between zones. Trackers and Ravagers killed all Champions and left MK on 7 boxes, which gave birth to a millions of whelps 😀 Stalker finished MK, and I forgot to take the fury… On the Left Long Riders bites the dust. I forgot to take a picture, but that is what left for me: Madrak, billion of whelps, 3 Stone Scribes without UA, Runebearer and Fell Callers. l was looking at the table and suddenly Maciej (Legion player) came to the shop and with the smile on his face said: “oh, I see a nice CK incoming!”. He was right, I had nothing to loose (I fact, I lost every other options… 😉 ) I grab 3 fury from the Stone and Madrak was full now. Fell Caller gave him +2 mat. Runebearer reduce a spell cost by 1. Madrak activates, cast Fury on himself. He charged a single Bloodtracker in front of Iona, killed her and grab a fury point (thanks to Rathrok’s Awakening). Now he was mat 10 (vs def 16), fury 5, p+s 15 (vs arm 17 from her feat). 3 dices on dmg. Iona had 2 transfers. I roll the dices propoerly and killed her with my last attack.