Today a game with Brohun and his Protectorate army.

Nothing new really. Returning to my slugish but relentless Storm Guard and still trying to find the perfect battlegroup for this list.

Deployment and 1st round:

I won the starting roll. Opponent picked a side with a nice positioned wall to hide behind. My Stormblades made their pregame moves. 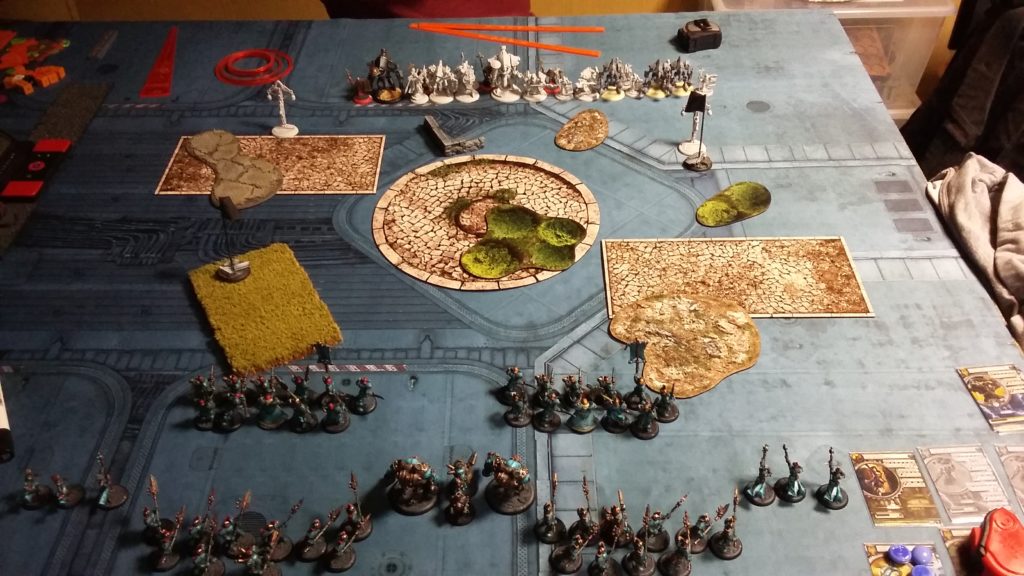 Everything moved forward. I had to move my infantry around the difficult terrain on the right flank. I cast Explosivo on the right Cyclone.

Brohun used his upkeeps and moved forward as well, hiding caster behind a wall.

End of 1st Round: 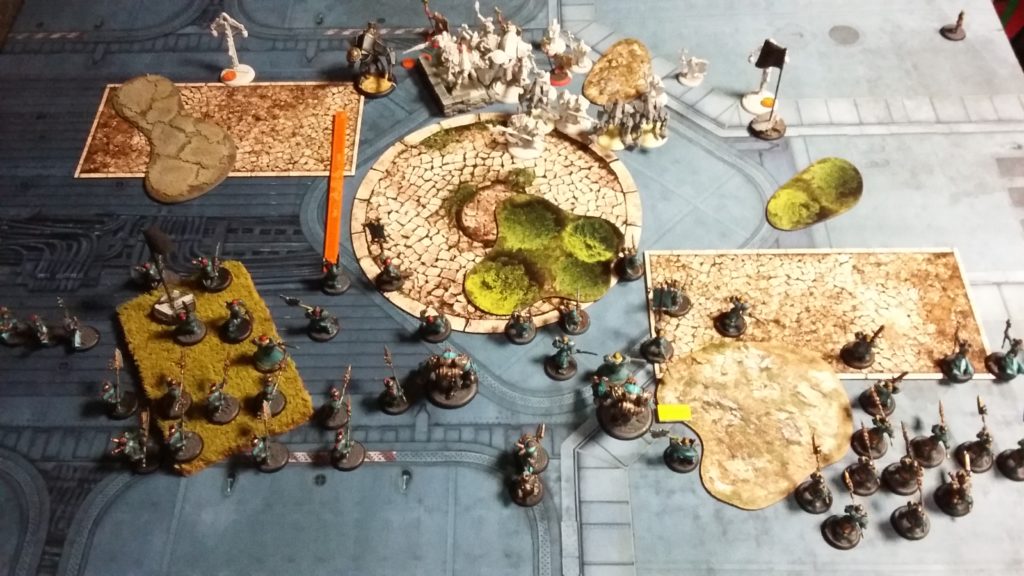 In the second round I ambushed with Anastasia, killing some random Choir member. The stormsmiths tried their luck but did not score any hits.

Siege shot groundpounder at couple of Purifiers, damaging one or two I think. Cyclones did not do anything usefull – one placed a covering fire in front of the Purifiers.

I also had some Stomblades in range so I charged, seriously damaging the jack that was previously hit by a Groundpounder. Stormblades used their +3 ARM minifeat.

In return Brohun killed and burned about half of Stormblades but he did not manage to move too far towards the zones and flags. The choir protected the jacks from ranged attack.

I scored 1 point for my flag.

End of 2nd Round: 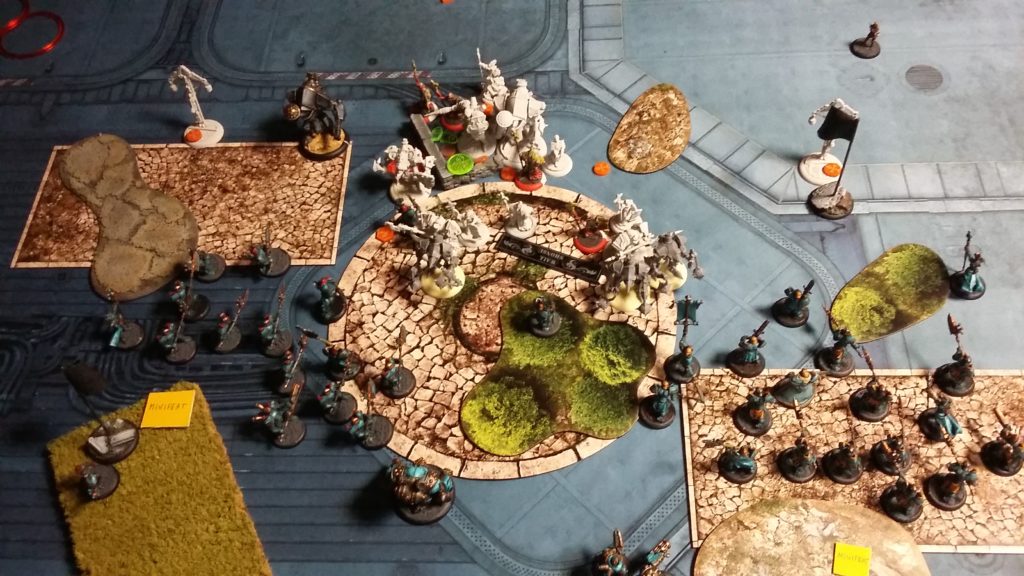 In third round I had to counterFEAT to do anything.

The groundpouder missed all targets terribly. Centurions only managed to kill some choir members – Brohun did not want to redirect the shots to the jacks because of my feat.

All infantry charged – I had to combine 3 guys for one hit to have at least avarage chance of hitting DEF17 jacks (Upkeep+Ashen Veil). I killed two Purifiers and put some damage to the left Reckoner (who was in Severius battlegroup, so not using Feat).

Most importantly – I blocked all the zones and paths to the flags. I also killed the Wrack on the right flag (charging Stormsmith was lost) and scored it with another Stormsmith.

My opponent tried to clear as much as he could, but he managed to score one point, while I had my zone and flag safe and easy scoring on his flag.

The game was over. 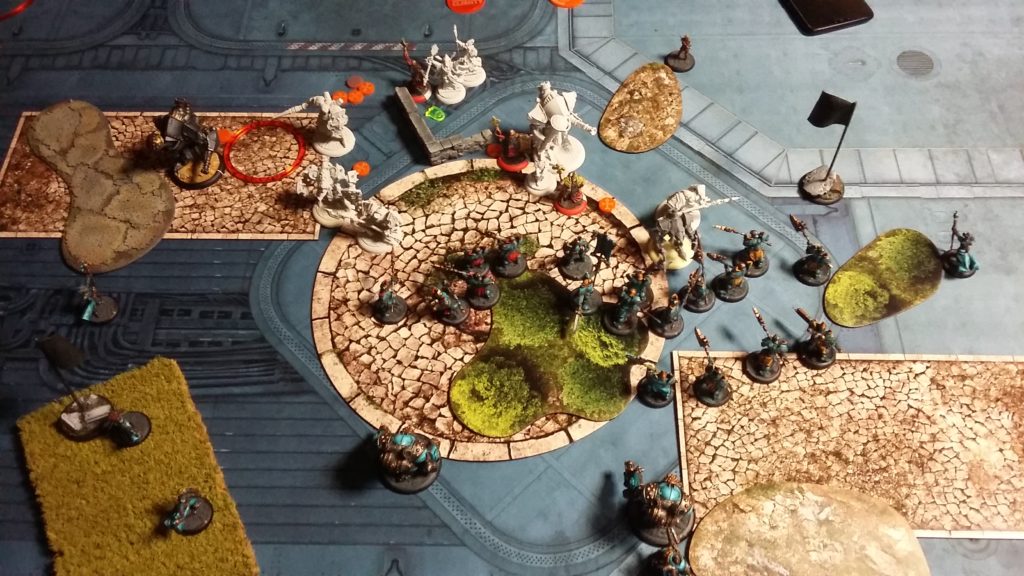 1. Brohun had a great idea with DEF17 jacks – I have never met such list before (popular Durst lists take heavies mostly). They were VERY hard to damage at range and not easy to kill in melee (combined attacks saved me).
2. However – the jack “wall” was not doing well against infantry in the scenario with so wide zones and flags. I know the pain because I was playing Karchev and had similar problems with scenarios.
3. Small Severius is a joke I must say. I dont know how the army-wide +1/+1 bonus was considered a good idea during the tests, but here it is – a must-have miniature in any theme that allows it. And people complain at Caine0… Would you prefer Cygnar to have +1/+1 aura instead? I don’t think so. 😉