We played 5 games at Friday.
All games by HR. 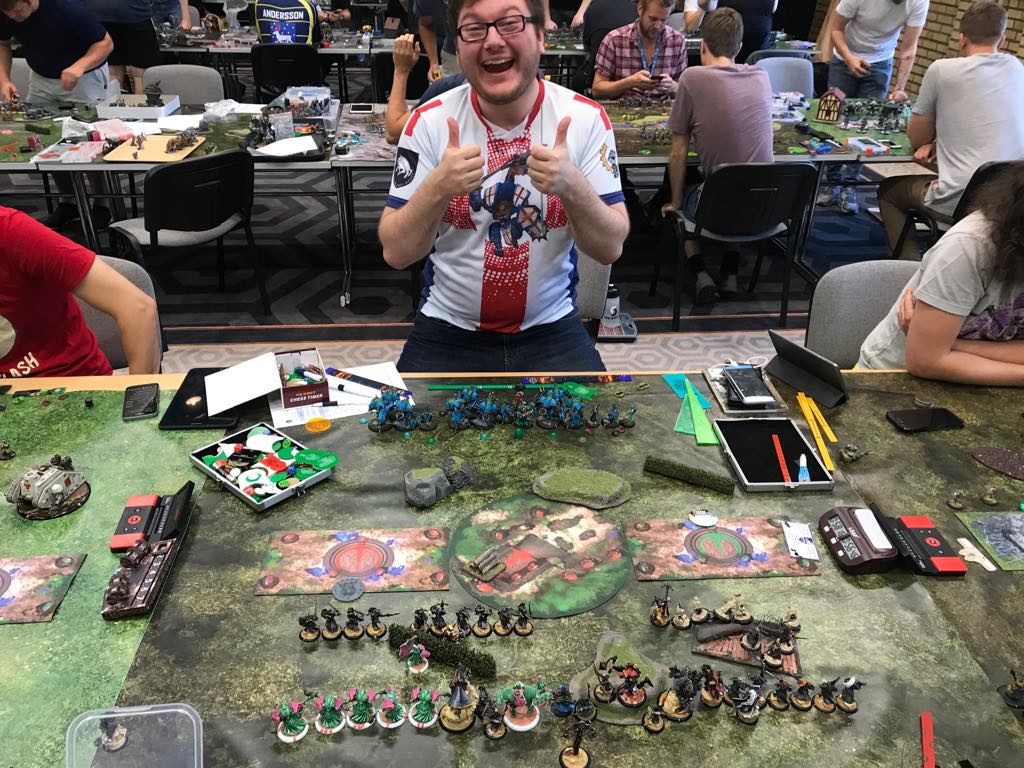 Cryx was lead by Mark David.

It was the best possible scenario for Slayers.
And Mark went first 🙁
First two rounds we played very carefully.
Then, Gaspy3 came to the middle zone and said FEAT.
After checking few things, FoS should be able to charge him (after vengeance movement).
It costed me nearly 30 minutes to clear the way, but I succeed.
Choir said Battle, HR cast Hand of Fate on FoS and he charged at Asphyxious.
After all my attacks, Asphyxious survived on 1 hp! 🙁
I had nothing more to finish him.
Rest of my models just ran to “cover” HR.
Mark was thinking about CK, but it wasn’t that easy.
He decided to kill as many models as possible, heal Asphyxious a little bit and ran to the safe place.
I started my turn with few minutes on the clock.
After measuring few things, I am able to try CK again.
Gravus ran near Asphyxious, HR cast Hand of Fate on himself and started casting Ashes to Ashes on Gravus back.
I had thousands of souls (focus) and Asphyxious finally died. 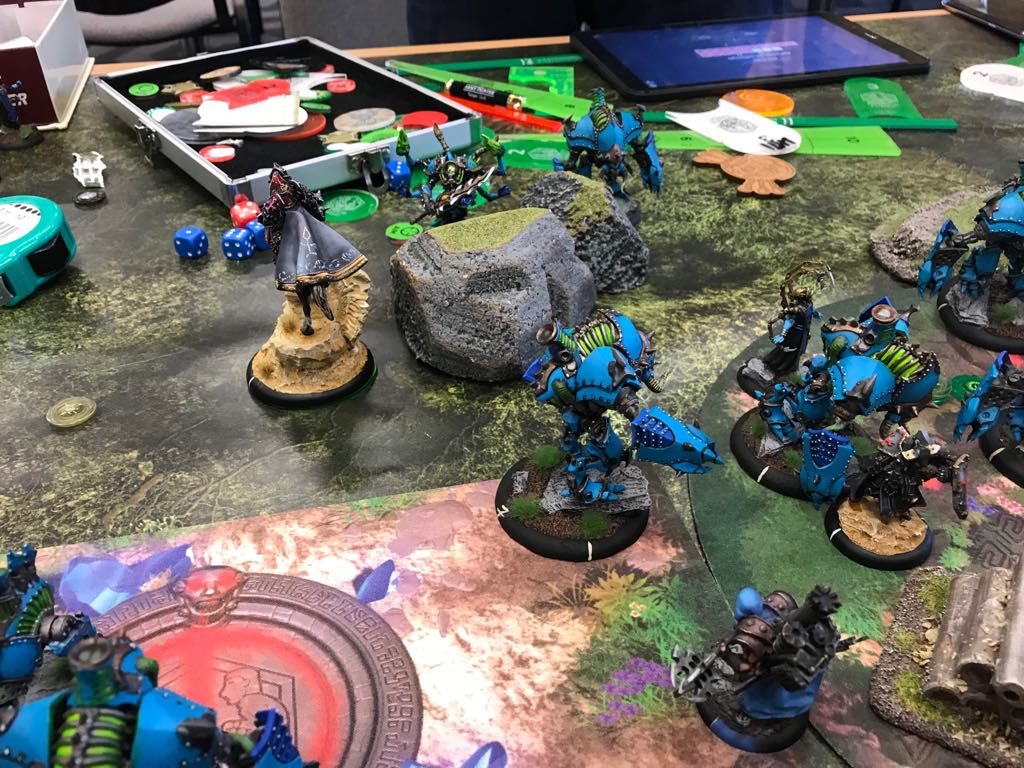 Mark, it was an amazing game!
I’m looking forward to play with you in the future, thanks! 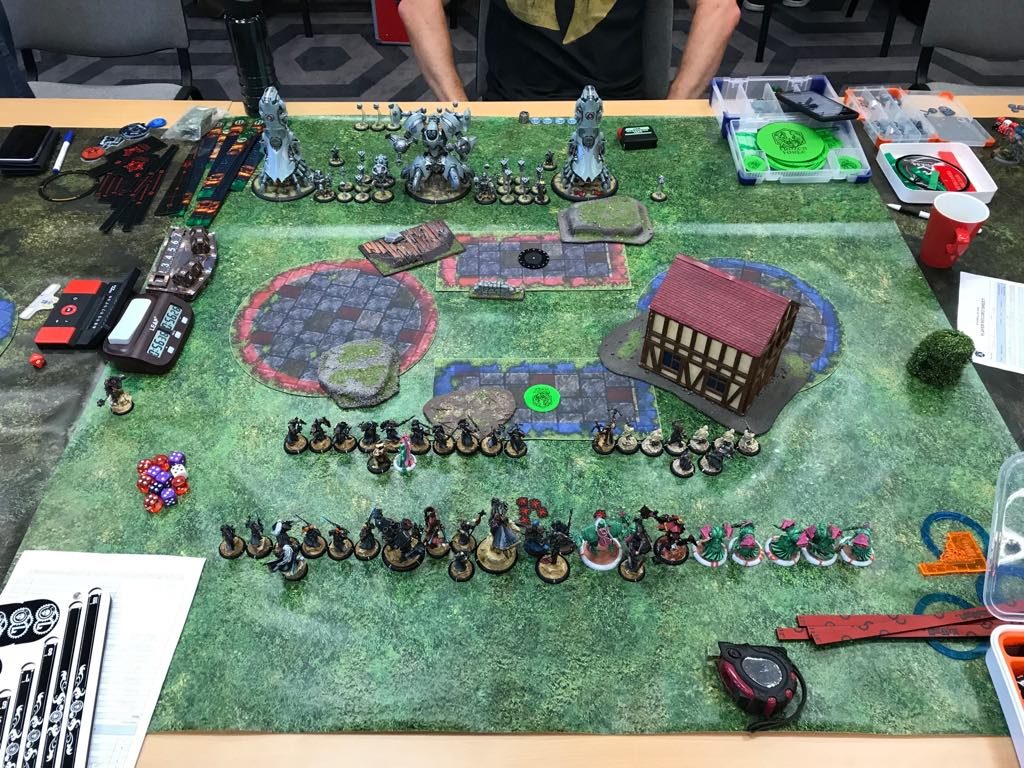 Look at this HUGE building on my right side.
It made the zone “unscorable” for my opponent.
This match and scenario was OK for me.
Errants and Idrians with HoF easily shot thousands of CoC solos.
In my FEAT turn, Knights managed to destroy the Colossus.
After this, the game was practically over.

Funny thing is, that one of my Seneschals destroyed CoC BE almost alone!
We had to immortalize it, in the image titled “BE hunter” : 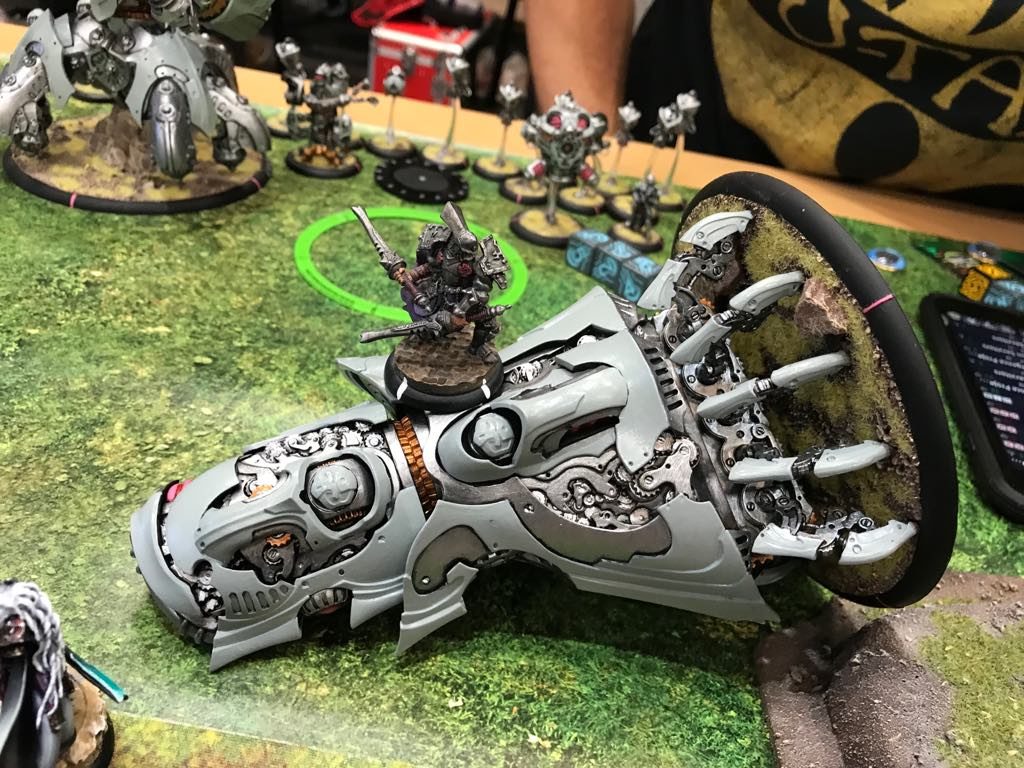 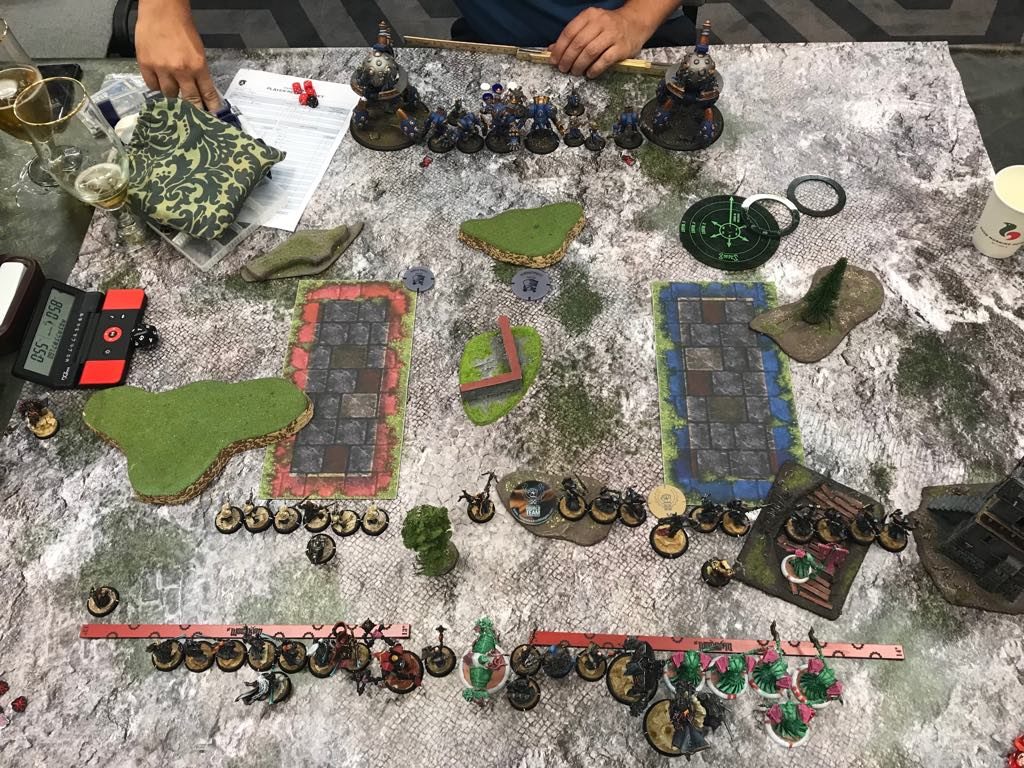 Cygnar..
I played milion games vs that faction.
In this matchup, it is all about Thunderhead.
His pulse “ignores” HR’s clouds.
I gave him few models, then used FEAT to charge and destroy this Jack.
After that, I could play the game on my own rules.
In some point of the game, Cygnar couldn’t contest my right flag.

So, I won by scenario. 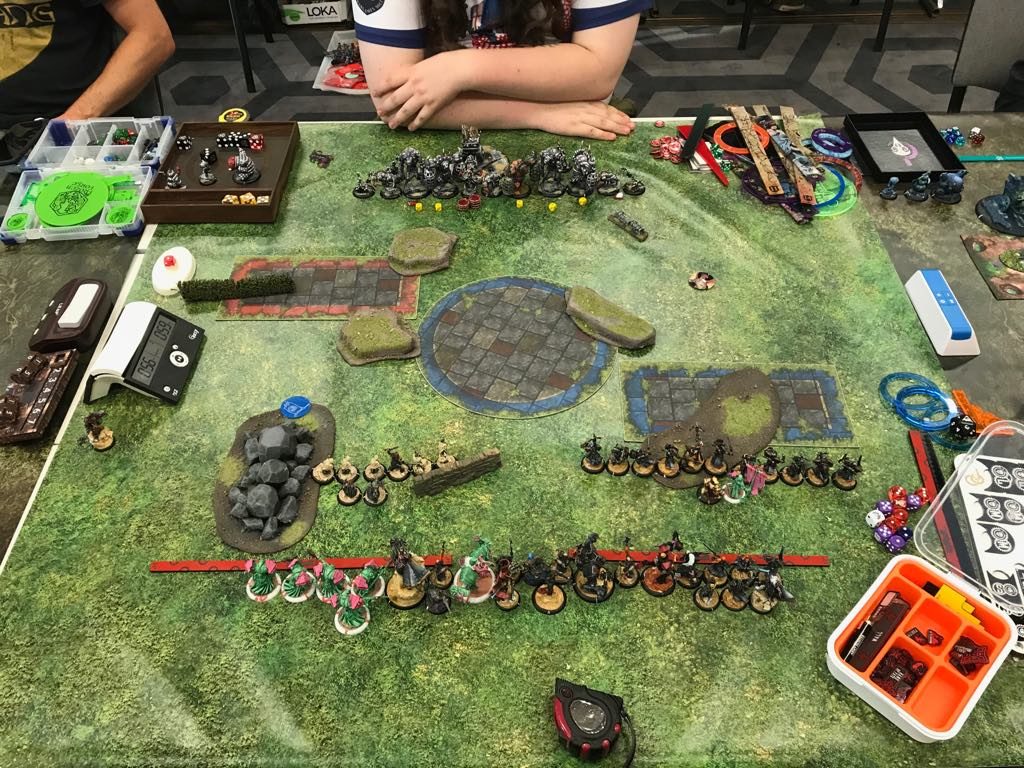 Grymkin was lead by Ben Hempshire.

I found, that HR vs Dreamer is always 50/50 game.
As I predicted before the game, it lasted 7 rounds.
Dreamer hard terrain from spell was the worst 🙁
Putting it in front of Bastions or Crusader is not so cool..
But, to be honest, I was winning this game by 4 scenario points advantage.
All I needed, was to kill one Skin & Moans in the zone.
So, Choir said Battle + HR cast HoF on FoS.
FoS charged at Skin & Moans and … missed!
Which means Skin & Moans survived.
After that, Ben killed FoS and few other models and slowly began to gain an advantage.
All in all, I lost this game by 1 scenario point, at the end of 7th round.
Stupid FoS ! 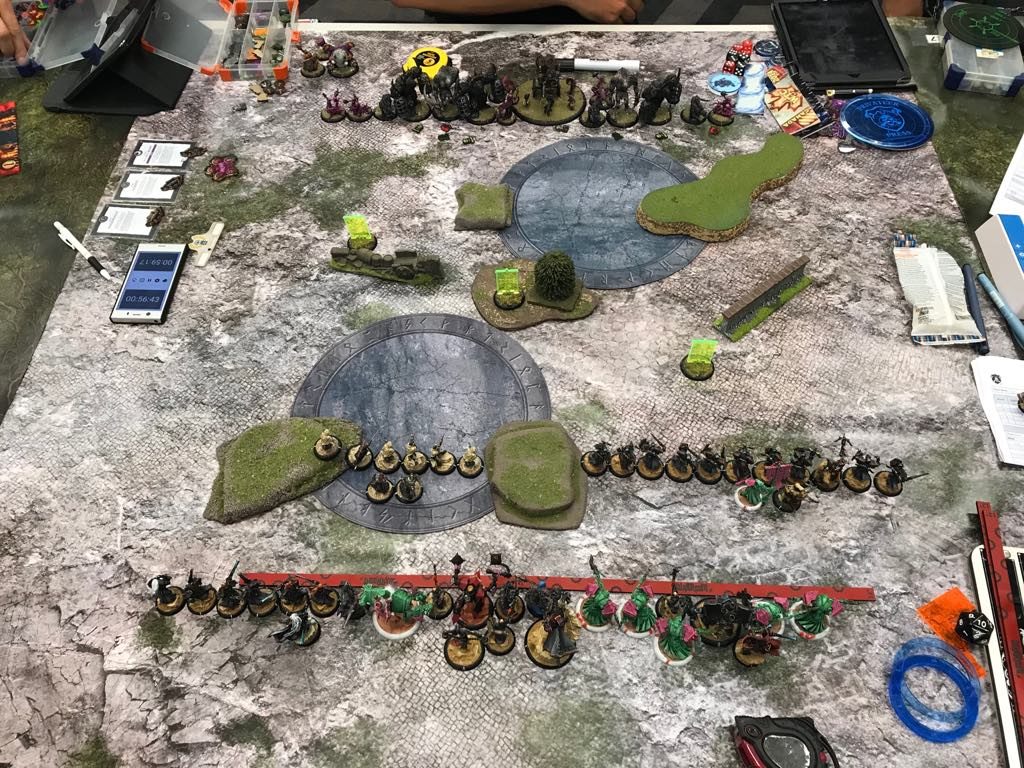 Exactly the same Dreamer list like Ben’s.
I managed to quickly kill the Gorehounds, which gave me some advantage on scenario.
Unfortunately, later, I lost so many important models and the game was practically lost.
But..
My opponent made a little mistake and left Dreamer on 0 Fury.
Which means few Errants (with HoF) shots and one fully boosted Ashes to Ashes.
It was my one and only chance, so I took it.
A2A made some dmg, but unfortunately, none of Errants hit the Dreamer 🙁
After that, I gave up.

So, it was the 1st gaming day in Sweden.
Next report will be from Saturday’s team tournament!
I was waiting for this upcoming tournament the most.
We made a super sweet team : Tomasz Mucha, Simon Battersby and me.
Circle, Legion and PoM.