Another test game with CID Morvahna1 😉

Pre-Game thoughts:
Honestly… I really hate anamag ;). I would never say she is too strong, but some elements in the lists are just ugly. Combination of extremely defensive Hellmouths/chosens with +2arm aura + one upkeep is just eating my resources turn by turn. My main golas were:
a) make chosens not fighting too close to rest of army (which was much easier with the terrain)
b) get rid of at least one hellmouth ASAP
c) get mongers/spears exchanging with me, with assumptions – I would get over them pretty strongly (long shot as I was playing that first time, but it was what I thought)

My rival went first, and he has chosen to make his strong cavalry much to the left, which was already playing into my intentions, moreover as the army is generally “not that fast” in terms of moving from flank-to-flank, I knew that Blightbringer + house + hellmouth potentially would keep cavalry on left. To be sure I would be able to keep them there I put my Death wolves and LotF to the left with support of the Boil. Rest of army was focused on winning right side. Prey was on Feral I suppose. 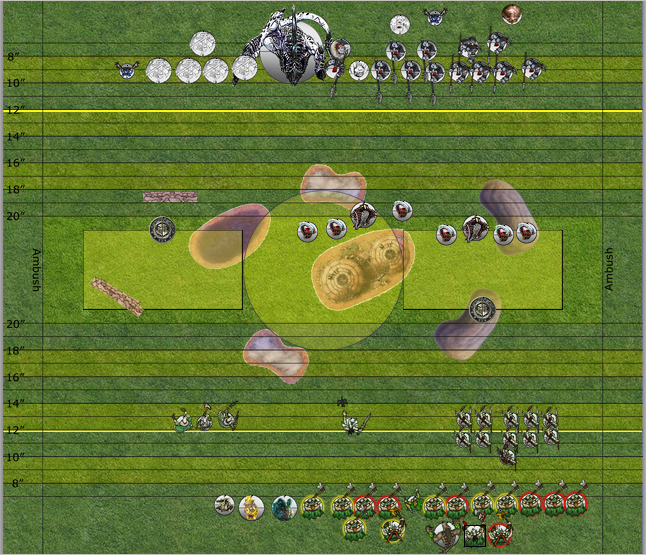 Round 1:
We both run. Mateusz was rather quite careful about positioning his army, from the other side I rather came rather safely to the right, position LotF in 16” from objective. And have my tharns and Feral in rang of hellmouth. Tracker were kinda baiting, but also there was no reason to keep them to far away. Harvest was in play, restore was on trackers. 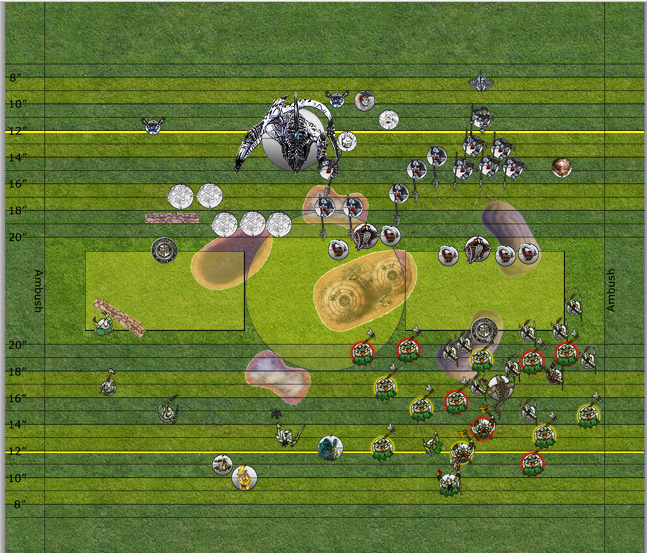 Round 2:
Legion player decided to rather carefully approach the game, and get me closer to him and then retaliate. Which is not bad plan at all, however I didn’t felt too bad with having the exchange (at least mentally ;-). So I took the bait. Tried to shoot preyed warspears (from 4 shots one died), and also I cleared hellmouth. I positioned rest of the army closed for further exchange (especially after vengeance). On the leftside I’ve went aggressively with the LotF but only taken one Chosen. The rest of death wolves get deeper to the zone. 1:0 on scenario. 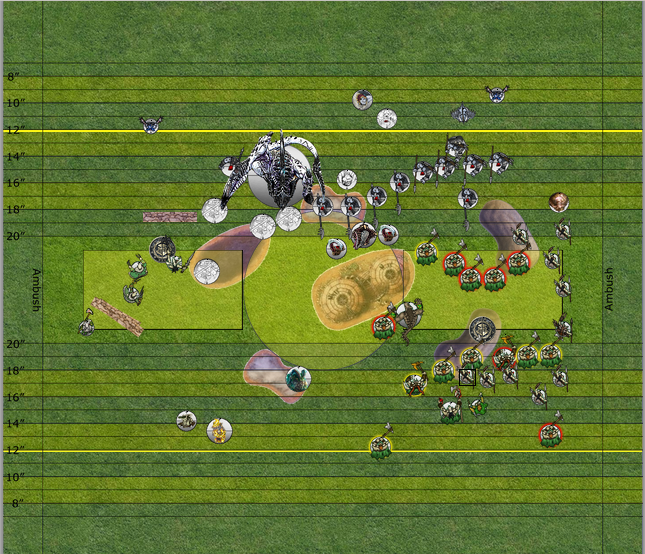 Round 3:
Legion went for planned retalation. He managed to get a bit more than I have expected so I’ve lost Feral, few trackers, few all tharns moved forward, and LotF, also Brennos almost died. On my turn I used Feat, resurrected few trackers, switched restoration on one of the ravagers unit. In response to opponent actions I removed another chosen, scratched objective, and completely erased from table all warspears and most of the warmongers. There was left only two basic mongers. I went 2:0 on scenario. 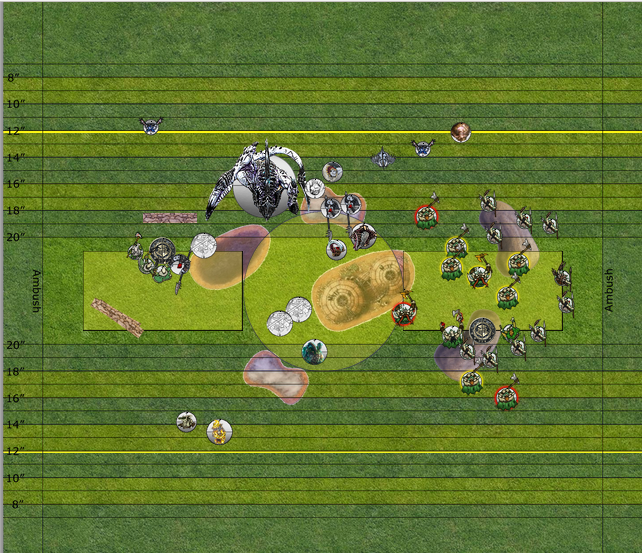 Game conlusion/Turn 4
I don’t have pics for round 4, we basically were running out of time in this evening so we’ve mostly discussed further actions, for sure my opponent would get rid of brennos. He had no way to score middle. He had some chances to get the left zone, zero chances to score my zone. On top of that, even he would clear some of ravagers – they would get back and “as planned” I was close to get only 2-3 chosens + BB against my ravagers + trackers. Which in my opinion was favorable for me in terms of keeping the scenario race. In the end – we didn’t play it to the end, no time this day ;).

Post game thoughts:
– I don’t think anything I would say about anamag would “new” or “surprising”. Very strong scenario keeping mechanism with helmouths and chosens. Very solid infantry clearing. A bit struggling with mobility and position on the table.
– Morvahna1 seems for me – at the moment – as caster that requires the arc node (due to Mortality), this one spell is turning whole game experience for tharn player. More than models recycling itself.
– First time Morv1 feat used, and it’s very nice tool to get rid of infantry
– Nothing new about other tharn models, maybe bit less impressive performance with LotF and Death Wolves, but still – they kept left side by itself which was useful enough.